Earlier this month, a group of scientists from the Geological Survey of India (GSI) found fossilised bone fragments of Sauropod dinosaurs which were from the Late Cretaceous, about 100 million years old. It was not the first time that dinosaur remnants were found in the state. But what was interesting this time was that the team that made the latest discovery comprised all women researchers from GSI’s Palaeontology division.
Dr Debahuti Mukherjee, Bashisha Iangrai and Dr Linashree Dalabehera have set an example by becoming the first women scientists in the country to make such a discovery. But the trio paid little heed when this was mentioned to them during a virtual interview. Rather, they were keen on talking about the experience during the field works in the tough terrain of South West Khasi Hills from where the bones were collected.
Mukherjee, who was leading the team and is now in Kolkata, said the field programme was formulated to study the upper Cretaceous Mahadek Formation. “Geologically, the upper Cretaceous sediments are in the southern part of Meghalaya and it is particularly of interest from the palaeontological point of view. This is because they mainly have the fossil formations. So, we took up the research with the objective to analyse the faunal diversity, refine the stratography of the Mahadek Formation and to see and also comment on the palaeo-environment,” she said. 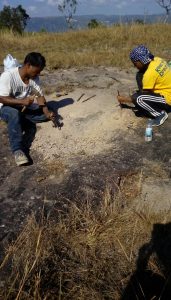 The scientists started their research in the summer of 2019 based on findings by GSI scientist Dr UK Mishra in 2001-02. The first destination of the team was Ranikor to recognise the particular horizons which can yield the dinosaur fossils. “You can understand how the team was excited to identify dinosaur fossils,” said Mukherjee.
Vertebrate fossil bone fragments were recorded from the lower part of the Mahadek Formation of Maastrichtian age from Mawphuli and Dirang villages near Ranikor in South West Khasi Hills. The bone fragments were collected from poorly sorted, purplish to greenish very coarse grained arkosic sandstone interlayed with pebbly beds, which are almost sub-horizontal striking North East to South West towards south cross beddings. The coarse-grained sandstone with ill-sorted grains of feldspar and quartz and fragmentary bones in the lower part of the Mahadek Formation imply very limited transportation, near provenance and influence of high energy continental detritus within a fluvial system.
Talking about the expedition, Iangrai said, “We found fragmentary bones of dinosaurs in an area of 1 sq km. The preservation, however, was not so good. In some places, the preservation was well enough to identify a few bones. We also ventured into thick vegetation where we found this particular bone which was different from the entire lithology of the place.”
The team recovered more than 25 disarticulated, mostly fragmentary bone specimens of different sizes and occur. Some of them were found in close proximity to each other. Taxonomic identification up to genus level is difficult due to poorly preserved, incomplete, fragmentary nature of the bones and most of the recoveries are partially petrified and partially replaced. Therefore, only three of the best-preserved ones could be studied. The largest one is a partially preserved limb bone of 55 cm long. It is comparable with the average humerus length of titanosaurids. Robustness of the bone, difference in curvature in the lateral margins and the proximal border being relatively straight also hint at the titanosaurid affinity.
Iangrai pointed out that owing to the climatic condition of Meghalaya and heavy rain, the fossils were “very much weathered and we could not bring the entire material to the laboratory”.
“Having said that, whatever specimens we collected form good database for paleohistological study, which is the 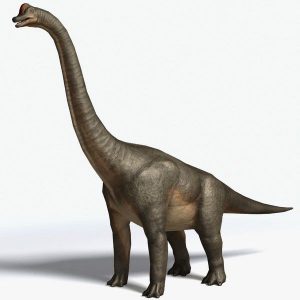 study of micro structure of bones. In micro-structure, the bones have shown characters of sauropod bones,” she added.
Another incomplete limb bone measuring 45 cm is also comparable with the limb bones of titanosauriform clade. An incomplete caudal vertebrae/cervical vertebra have also been reconstructed from a few recovered bone specimens. “With more research on the specimens, we will be able to find out further details,” Iangrai said.
Titanosaurian sauropod dinosaurs were the most diverse and abundant large bodied terrestrial herbivores in the Southern Hemisphere landmasses during the Cretaceous Period but are not endemic to the Gondwanan landmasses In India, the Late Cretaceous sauropod dinosaur generally belongs to the titanosaurian clade and has been reported from the Lameta Formation of Gujarat, Madhya Pradesh and Maharashtra and Kallamedu Formation of Tamil Nadu The record of the sauropod assemblage of probable titanosaurian affinity from Meghalaya extends the distribution and diversity of vertebrates in the late Cretaceous of India.
“This was a team work and it was a good opportunity to present our research,” said Dalabehera, who is from Odisha.
Explaining the geological characteristics of the place, Dalabehera said, “When we started the field work in the southern part and moved west to east towards the upper part of the Madadek Formation vertically, the faunal content varied. The Mahadek sediments indicate fluvial, transitional to shallow marine environment from the lower part to upper part of the Mahadek.”
When asked why a GSI team took so long to find the fossils when it was reported way back in 2001, Mukherjee said though works were on in parts, “no focused palaeontological work was taken up”.
“(Sighting of) fragmentary bones were being reported. What we were trying to focus on was finding a bone specimen that would be convincing enough to prove that it was of a dinosaur… Research is finally a chance finding and it was our good luck that we found it,” she smiled.

The climatic condition of the state was a major challenge for the researchers to find the specimens. Iangrai said when the team visited in 2019, “the bones were very much there but when we went in February this year, they were completely worn out”.
“Rain plays a spoilsport for bones, which are already weathered and broken,” she added.
For Dalabehera, the difficult terrain was the biggest challenge. “I am from a plain land. The terrain was really a challenge. Also, the southern part of the state was humid. We had to work under such conditions,” she said.
Challenges were galore but for Dalabehera, it was a fulfilling experience. “The fact that all of us were women was really heartening. Our leader, Debahuti ma’am, guided us through the research. It was a great experience,” she said.
Not many would know Mary Anning, the 18th century palaeontologist who would be remembered for her findings in the Jurassic marine fossil beds. Her works changed the course of palaeontology.
The GSI team of three women scientists has also achieved the feat by breaking the glass ceiling and set an example for others to follow. But this is not the end as the team’s research is on for several other breakthroughs.