Shillong, June 11: Under pressure, the power department has decided against outsourcing the operation and maintenance of two hydel power stations, 120 MW Myntdu Leshka and 40 MW of new Umtru.

Power Minister James Sangma told reporters on Friday that key decisions were taken after he held a meeting to discuss the action plan to improve the efficiency of MeECL as the turnaround target is six months.

James said one of the decisions taken is to suspend the outsourcing of Leshka and new Umtru projects.

“The MeECL has the confidence that they will be able to continue with the operations of these two power stations”, James said.

Another decision is the complete automation of sub stations to reduce the dependency on manpower.

The power department has decided that the MeECL will repair the damaged transformers in the state and will not wait for 30 per cent payment to replace the transformers.

However, the government has put a condition that the connections of those who default on payment, will be discontinued. There are around 300 damaged transformers in the state.

The meeting also decided to find out the existing vacancies in all categories under MeECL and the justification to initiate recruitment.

Another decision was to rationalise the existing staff.

“There are 4,800 employees, including contractual workers and we need to rationalise the deployment of staff”, he said.

The meeting wanted to entrust the MeECL to  draft a review petition for the revision of tariff by the Meghalaya State Electricity Regulatory Commission.

James said the power department will instruct the MeECL to prepare a report as to how the former can activate  the Umtru 1957 power generating station. The government has also sought a report on Riangdo and Ganol projects.

James said that it was made known that for the last four years, no auditing of MeECL has been done.

The auditing of accounts has not been done since 2017 and this needs to be done, James said.

Another decision was to check the revenue leakages and realise the outstanding dues.

Prefab Covid hospital to come up in Jowai 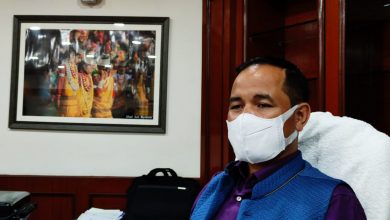