A noted octogenarian photographer in Shillong, Ahmed Husain, once said while narrating stories of the liberation war in East Pakistan and his meetings with the revolutionaries, “We, as Bengalis, had felt it was our duty to help the young fighters (mukti joddha) on the other side of the border.”

Growing up in Kolkata in the eighties, one would listen to stories about Sheikh Mujibur Rahman’s fiery speeches and how he inspired Bengali youths in “Bengal” (the reference would always be Bengal to mean an undivided land whose citizens were bound by the same language). There were also stories about how news of the brewing war in East Pakistan trickled to West Bengal and Bengalis on the western side waited eagerly for ‘Padma-r khobor’ (news of River Padma, which meant news from East Pakistan).

For those readers, Bangladesh War: Report From Ground Zero would be nostalgic and at the same time enlightening. Written by renowned journalist of The Statesman, Manash Ghosh, the book is about the author’s coverage of the liberation war, his experience in the conflict zones, revelations about the treacherous game being played in the corridors of power in the neighbouring country and the national and international politics of the time.

Ghosh was a green reporter with the then leading English news daily in erstwhile Calcutta when he first got information about an imminent war in East Pakistan and persecution of the Bengali-speaking populace there by the ‘Khan army’, a pejorative used to describe the West Pakistan army.

On November 15, 1970, Ghosh went to Petrapole-Benapole, the India-East Pakistan border in West Bengal, to cover a car rally and ended up doing a 4,000-word cover story for Sunday Statesman based on his conversation with three prominent Bengalis from the other side of the border. His detailed report gave Calcuttans an insight into the turmoil in East Pakistan for the first time. Bengalis in the west learnt about the war that was in the making.

Though East Pakistan was a close neighbour, it was difficult for newsmen from Calcutta to travel to the troubled land as the West Pakistan government would often deny entry. If one was lucky to be allowed, the journey was cumbersome through Islamabad. This prevented news from flowing to West Bengal and the trickling reports in the local media were only based on official statements of the high-handed West Pakistan government.

Ghosh’s first detailed report changed it all. The Indian media started following up on the developments in East Pakistan. Among the news agencies, UNI was topping the chart in breaking news of East Pakistan which percolated through the borders in the northeastern states like Tripura. The book recounts how prominent reporters of the time, and Ghosh’s seniors in the profession by many years, wrote about the political storm, an arrogant government’s betrayal, people’s resilience and the gory details of the Pakistan army’s torture. 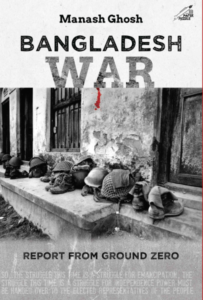 But those were tales from the borders. Ghosh wanted to tell his story from ground zero and was determined to cross over to East Pakistan. As he struggled to find the right contact, he continued to visit the borders, keeping the stream of reports about the liberation war flowing in The Statesman. He was among the first few Indian journalists (Ghosh was accompanied by his colleague, photographer Shyamadas Basu, and later another reporter from Calcutta) who travelled to the interiors of present Bangladesh and witnessed the ghastly crimes of the West Pakistan army. None could, or had dared to, cross over to East Pakistan till then to report the unfolding of a chapter in history that would culminate in a glorious victory.

Ghosh also reported about the influx of refugees in India through the porous borders and alerted in his articles about a looming economic and social crises in the country.

The collection of photographs in the book complements the narration of the war and the author’s journey.

As Ghosh recollects his journey and describes his encounters with numerous leaders of Awami League, bureaucrats in East Pakistan and grassroots fighters of the liberation war, he also weaves in anecdotes about the hostility and insensitivity of and politics in the Indian media.

But beyond that, the book is a narrative about people’s struggle, led by a visionary leader, against government exploitation. It is the story of people’s victory and the birth of a nation that is celebrating its 50th anniversary.

“Manash Ghosh’s steadfast and unwavering commitment to stand by the defenseless and persecuted Bengalis of former East Pakistan led to this book,” wrote Dr Muntassir Mamoon, professor at Chittagong University, in the foreword.

For once-regular readers of The Statesman, the book will be a poignant possession not only for the time and history of events but also for the language that made the newspaper every intellectual Bengali’s pride.

Photos from the book