I love you as certain dark things are to be loved,/in secret, between the shadow and the soul. ~ Pablo Neruda

When a secret love and blasphemy of sisterhood led a young nun to the end of roads, then one would wonder why the divine love remains largely unacknowledged and unaccepted in society. The Intern, a short film written and directed by Gaurav Kuri, leaves a trail of questions for the society as well as about it.

The film, which will be screened at the International Film festival of South Asia Toronto next month, is not just about same-sex love and its acceptance in society but also the restrictions and taboos which dominate judgements even in a modern world.

“I decided to represent on screen a small subject under the umbrella of the whole LGBTQ… because I feel that, as a filmmaker, I have a responsibility to the society in which we all live… I think it’s the same everywhere in the world. It is still considered to be a taboo. But I must admit that times are changing,” Kuri, a 29-year-old graduate from Rookala Kendro film institution in Kolkata, told Sunday Monitor.

Kuri’s interest in the other dimensions of love and existence was piqued a few years ago when he was working on a public service announcement “for which I read a lot on LGBTQ and it stayed on into the short film also”. 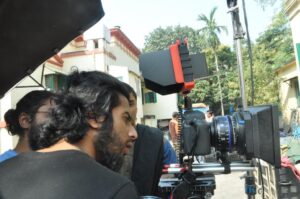 The young filmmaker, who is an alumnus of Laban Bengalee Boys’ Higher Secondary School, impressed viewers at several film festivals. The Intern was his project for student short film under Roopkala Kendro.

The Intern is about a teacher’s relationship with one of her students and how their love would spell doom for the young nun. “I was around churches my entire life because I was born and reared in Shillong. I tended to go into empty churches so I could experience the silence that surrounds it. Most of the time, it felt certain. I wanted to imitate that setting in this film,” said Kuri.

Talking about his journey to the Toronto film festival, Kuri said, “The Intern was the team’s pure labour of love. This was the first time the core crew shot a short film with a decent budget. The project was a part for our academic programme at Roopkala Kendro, a film school supported by the state of West Bengal. The whole team shared a strong sense of purpose. So, the fight was already won in part. The feedback was overwhelming for the entire team once the project was finished and sent out for screenings and festivals. Having people enjoy your work makes you feel wonderful all the time. That way, it’s incredibly motivating.”

Kuri has also made a documentary, Gessu (Hair). “Hair served as the sole source of inspiration for Gessu. I wanted to hear what people thought about hair. What their opinions are about it. The documentary has numerous layers that came directly from the subjects themselves and exposed many socially constrained viewpoints,” said the young director from Barapathar locality in Shillong.

According to Kuri, cinema is a stronger medium than words or pictures alone for expressing oneself.

An apple a day keeps skin problems at bay