Shillong, Dec 5: The commissioner and secretary, planning department, D Vijay Kumar has clarified that all procedures were followed regarding the projects under Meghalayan Age Ltd.

According to the official, the state government rejects all the claims which “are fabricated and devoid of facts’.

Further, the issuer of the press statement never approached the state government or any of its agencies to seek any information nor used any of the publicly available information including those available at https://meghalayatenders.gov.in, he said, adding that the issuer of the statement has made ‘such motivated and inaccurate claims in the past and it appears that the sole intention behind the recent press statement is to mislead the public’.

“The State Government views this very seriously and is considering suing the issuer of this press statement for defamation”, Kumar said.

Kumar, who is also the CMD of The Meghalayan Age Limited (MAL), said it  is a state government company under the aegis of the Planning Department, which has been incorporated under Section 2 (45) of the Companies Act, 2013. The project cost for the Meghalaya Ecotourism Infrastructure Development Project ( MEIDP) is about Rs. 731 crore and is one of the many externally aided projects (EAPs) being implemented in the state.

The official added that further, the entire tendering process for MEIDP is being done as per the norms of the state government and is being overseen and approved by the funding agency, the New Development Bank (NDB). All the details are made available to the public at https://meghalayatenders.gov.in.

“Given the above, it appears that all the claims being made by the issuer of the press statement seem to be highly motivated and accordingly apoint-by-point detailed response is being issued”, the official added. 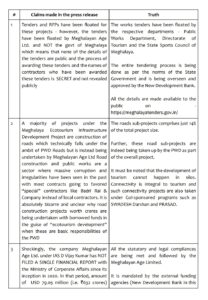 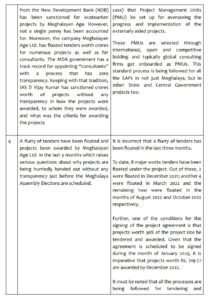 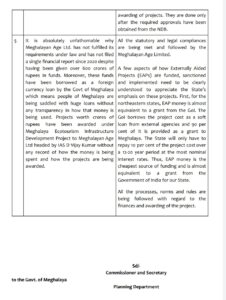