Poet and author Udayaditya Mukherjee is enamoured of the enthralling beauty of the North East and the simple and hospitable tribal populace here. His tryst with the tribal lifestyle during his service in the Indian Army has left an indelible impression on him that later found expression in his writings.
“I got the chance to visit North East at a very early stage of my career… I was posted to Assam Rifles, a paramilitary organisation deployed in the entire North East. I had instantly fallen in love with the people and locales of the region. This first tenure in NE was for three and a half years and I spent the duration in eastern and south-eastern part of Arunachal Pradesh. I was spellbound by the pristine landscapes covered with lush green forests and crisscrossed by numerous rivers and streams flowing with vibrant energy of life,” Mukherjee, who grew up in Kolkata and is currently living there, said in an email interview.
His ebook By The River Dibang, which was published by Readomania in 2019, is a collection of short stories which are deeply rooted in the Mishmi tribal culture, tradition and myths. Mukherjee focuses on the tribe’s spiritual beliefs and the mythological stories which have, for centuries, shaped the tribe’s ways of life.
“I have been to all the states, except Tripura and Mizoram. I have only fond memories of these places and the people residing there. I was immensely moved by the simplicity, honesty, hard work and hospitality of the people all across the North Eastern region,” the author said.
Mukherjee calls himself a helpless dreamer and often crosses the “slender line” that demarcates dream and reality. “They co-exist and emanate from each other to absorb in unison again. They are complimentary to each other in the entire scheme of our existence.”
Sunday Monitor came across the stories weaved along the banks of the Dibang and wanted to hear more from the author. In his interview, Mukherjee shared his memories of the Mishmi people, their enchanting stories, his travels through the North East and the pristine beauty of the region. Excerpts:

The simplicity and warmth of the Mishmi people touched me and I found that they had remarkably maintained their traditions, cultures through ages. For a city-bred person, I found these people impeccably connected to the nature and mother earth. To me they appeared to be more civilized than a person like me who could boast of growing up in a metro city.
This tenure (in the Assam Rifles) also gave me the chance to travel extensively through Assam, Meghalaya and Nagaland. I have travelled to almost all parts of the country but the kind of pure smile that I have seen on the faces of the people in these states is unparalleled. The hospitality of all the people in spite of grappling with issues like insurgency and scarcity of resources is something I will cherish throughout my life.
Later, I again had two more tenures in the states of Assam and Arunachal.
The scenic beauty of the North East is unimaginable. People who have not ventured into the Brahmaputra basin do not know what they have missed. From the plains of Assam, the tea gardens, the verdant monsoon-flavoured Cherrapunji, the cosiness of Shillong to the Naga villages settled on the rolling hills of Zunheboto and Phek districts and the Loktak Lake in Manipur, the entire region is resplendent with such benevolent bounties of nature that one needs to see to believe.
The ethnic diversity of the region is another interesting aspect which can be a researcher’s delight. However, for a soldier like me I was mesmerised by the kaleidoscope of the colours and flavours in the region. From the dresses to the cuisines, I savoured everything in this diaspora of life.
There are many memorable experiences associated with the region. I shall limit myself to only three.
Firstly, when I reached my air maintained post in the Lohit valley of Arunachal I still remember how the Mishmi people of the tiny village welcomed me by hosting a small feast for me in the community hall. I was immensely touched by their gesture as I had later realised these people who survived on Lai Saag (green mustard leaves) and corns on most of the days owing to scarcity of other vegetables had indeed stretched themselves by pulling in their personal resources to honour me. I had promised that day that I would always assist these people to deal with their day-to-day challenges and I tried my best till the time I had remained posted there.
Second story worth mentioning is about crossing a Tawa (rope) bridge over a 50m-wide river somewhere in Nagaland. It had rained heavily and the river which otherwise could be crossed by wading through, was in full spate. The villagers had connected two sturdy trees with a strong rope and one had to cross the river by harnessing himself with the rope and slide holding a wooden contraption fastened on the rope. For people who have read Phantom comics can visualise such a crossing arrangement. We had gone for a patrolling and while returning found the river to be all swelled up. This type of crossing required good amount of strength of the arms, waist and legs because one needed to slide across hanging upside down with their legs also folded across the rope.
As you slid down till the middle it was easy but then due to slouch of the rope pulling oneself over the other half was quite exhausting. Two of our soldiers had been completely drained and needed help to be pulled up to the near bank. To my surprise I found two women who were working in the nearby fields glided themselves across the rope without any harness and easily pulled the boys to the bank. The stamina and vigour of these women were astonishing. They were as hardy as best of our soldiers. I revered their physical prowess and courage thanking them profusely. I wondered why do we use the phrase “Son of the soil” while it was equally applicable to the women in the region. If you really want to see gender equality you should observe the women in the North East region. Their holistic abilities encompass activities ranging from taking care of the home to working in the fields, hunting, towing loads heavier than a man could carry over steep mountain slopes and trekking as guides into the hostile terrains. I really laugh to myself when I see in cities women defining woman emancipation based on trivial issues.
Thirdly I must comment upon the wonderful initiative that was taken by the Government to induct surrendered militants in the Armed Forces. I had the proud privilege to have few of these men in my company and they in due course of time had turned out to be very capable and trustworthy soldiers. Few knew the hills and jungles better than them and their contributions as scouts or path finders during patrolling were immaculate. I had entrusted them with important security duties and they went beyond the call of duty to prove their mettle.

I have written about the connection of the Mishmi lands with the characters of Mahabharat and other mythology in my book “By the River Dibang”. What I discovered sitting at my post, through interaction with a village chieftain deep inside the Lohit valley of Arunachal had left me bewildered. 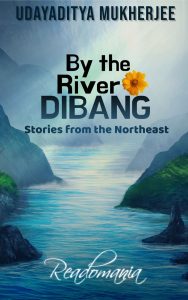 A village Gaon Bura sitting almost 90 kms away from the nearest road head actually narrated me the story of Lord Krishna and princess Rukmini whom they believed to be from their clan. I further collected more inputs from various other sources and was convinced that during times dating back to five thousand years or more the people from the region hosted visitors coming from the mainland Aryavarta.
Ghatatkoch, son of Bhim and Hidimba, married Kamakantika or Morvi, the warrior princess of Kamrup! Their son Barbarik was regarded as the most gifted warrior in Mahabharat who could end the war in a day by his divine weapons. He is worshipped as a God in many parts of Rajasthan and Haryana.
Arjun married princess Chitrangada from Manipur. There are many such examples. So, you can see how the entire region of North East in spite of the remoteness had remained culturally and demographically entwined with the rest of India since prehistoric times.
Many of the traditional practices in the tribal society have originated from the folklores and myths in the region. And though today the region stands more connected to the rest of India owing to development of infrastructures it is heartening to see the present generations have not shunned their age old rituals and beliefs. These heritages are their strengths that on one hand bind them with the mainland India and on the other hand preserve their distinct identities.

I used to read a lot since childhood. My father, late Arindrajit Mukherjee, used to compose poems though he never got them published. Probably that had an influence on me. I started writing as early as a teenager. With the advent of social media, I started posting them on Facebook. One day a friend forwarded the poems to a publisher who showed interest in publishing them. That’s how my first book “Rhythms in Solitude” was published in 2017 by Kaveri Books, Delhi. Then at the behest of my childhood friend, an author and journalist herself, I submitted a story on ‘Persons with intellectual and developmental difficulties’ to a publishing house, Readomania, which got selected for their anthology.
The story The Beautiful Life in the anthology Twilight’s Children fetched me good reviews. It boosted my morale and I went on to participate in a short story contest held by the same publisher Readomania. My story The Boy Who Dreamed of Trains was adjudged the best story in the contest and I was offered a contract to publish an ebook. That is how By the River Dibang was published in 2019. This was followed by Once upon a time in Sundarban, a young British Army Captain’s adventure to the uncharted deltas during colonial times and Karama by Chance, a crime thriller based on the theme of #Metoo movement in Bollywood.
I read a variety of books. It is difficult to name one or two authors but I can mention the names of Saradindu Bandopadhyay, the creator of Byomkesh Bakshi, and Wilbur Smith who writes on ancient Egypt and Africa, whose works inspire me owing to the vast genres they have written on.

The story of warrior princess Kamakantika of Kamrup who had singlehandedly defeated the five Pandavas who had to be rescued by none other than Lord Krishna and what followed suit is something I plan to write about as a fiction in future.

Two portions of Shillong-Dawki road to be re-tendered

MMSA threatens to agitate over humiliation of Dr War