“We strongly condemn the NPP’s attempt or for that matter any political party in power, to politicise the state’s development projects and misleading the people through  propagation of their own party’s flags,” HYC general secretary Roy Kupar Synrem said in a statement.

Pointing out the pictures posted at the NPP’s official facebook page, he said several flags of the NPP were seen at the venue where the Chief Minister Conrad  Sangma had laid the foundation stone for the Nongstoin-Maweit road. 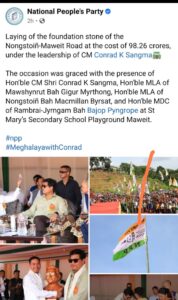 He said even the makeshift tent for sitting of the VIPs and leaders of the party were adorned with the colours of the NPP flag.

“The same venue was used to officially lay the foundation stone and to hold the so-called party meeting. It is sad that the chief minister who is set to represent the state as a whole and work for the welfare of people in an unbiased manner, is using a government platform to market his political party,” Synrem said.

He said this is totally unacceptable and should be condemned by one and all.

The HYC leader said improvement of civic infrastructure and overall development of the state is the prime responsibility of any elected government, it is not a favour done by them to the people.

He said to ensure people’s welfare and the progress of the glorious hill state, the HYC will continue raising its voice against any misgovernance or misdeeds at the hands of the ruling dispensation.

“We warn the parties in power not to politicise any government projects in the near future and we shall be vigilant henceforth Andrew will be forced to take necessary steps if this is repeated,” the HYC leader said.

The HYC also called upon the people of the state, to be vigilant against the excesses of political opportunists and to raise a voice of protest as and when they come across such an activity.

State gets award for JJM performance