Shillong, July 3: Two persons were arrested and two vehicles seized in connection with a drugs smuggling case and illegal transportation of cigarettes, on Saturday.

According to East Jaintia Hills police chief Jagpal Singh Dhanoa, based on credible inputs regarding transportation of contrabands from Silchar to Shillong, checking was carried out at Umtyra check point .

Heroin weighing around 326 gms and two mobile phones were seized. 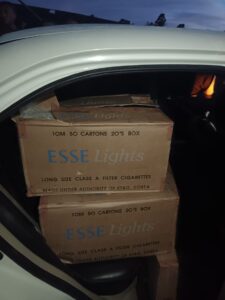 Another Maruti Dezire (AS 11 T 1645) was found abandoned under Khliehriat Police Station jurisdiction.  From the vehicle,13 cartons of cigarettes were seized .

Police are on a lookout for the occupants of the vehicle.

It was a joint operation of East Jaintia Hills  ANTF under DSP Bidhan Bhattachrjee and Anti Infiltration unit of Umtyra CP .

Two separate cases are being registered under Khliehriat PS, the SP added .