Shillong, Dec 6: The regional political outfit, UDP has become the first party in the state to officially declare the list of 32 candidates for the 2023 Assembly polls at the party office, on Tuesday .

Our of 32, thirty were present.

Party general secretary Jemino Mawthoh released the names of candidates in the presence of president Metbah Lyngdoh and other senior party leaders. 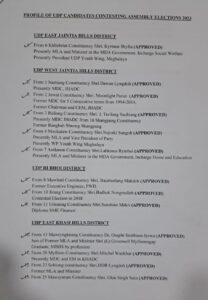 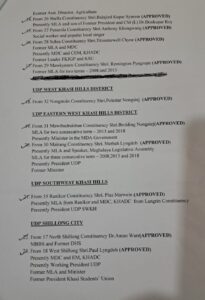 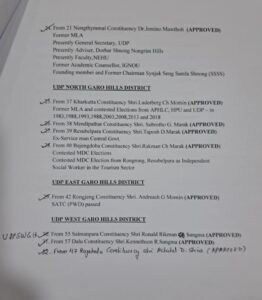 Seven sitting legislators are among the names of candidates.

After felicitating all the candidates, Metbah Lyngdoh said there is a growing need for a strong-independent political alternative, which could stand up for the aspirations of the people of the state.

In politics, regionalism is an ideology that highlights the local identity, the need for independent regional planning and administrative freedom.

“I feel there is scope for a regional political party in the state to fulfil the dreams of the youth and the need of the people of Meghalaya, which the national parties have failed in doing so,” Lyngdoh said.

He also claimed, “In UDP, we have no high command and no big boss culture, political arrogance to stop us from thinking about the state. That is why a section of people, who are associated with these national parties has now joined the UDP.”

He said the state of Meghalaya has always seen national parties dominating the political landscape of this North Eastern state. Unlike the other states like Mizoram, Nagaland, Sikkim where regional parties rule the roost, the UDP that was founded by late EK Mawlong is a bigger player here.

Referring to the MDA government, the UDP chief said, “In the government that we are today, our role are nonetheless like a team to look after the welfare of the people of the state and we have been able to save the state from losing its good image.”

In the previous election, he said the party managed to hold on to its strongholds and win a respectable number of seats but we have not got enough to form a government on its own as the regional party is limited only to a few pockets.

“We hope that this 2023, people will give us the mandate since in many pockets, the people of the state are in search of an independent political voice of their own,” he asserted.

Stating that many sees UDP as a political alternative in Meghalaya, Lyngdoh said, “There is a political vacuum to be filled but the party has not been able to convince the voters and present itself as a viable political choice for them. I strongly believe that only a regional party can develop our state, stand against injustice meted out to the state and stand up for its language and culture.”

“If the states of Bihar, Andhra Pradesh, Telangana, Bengal and Odisha can have their own regional parties why not Meghalaya, and we pledge that we will do anything for the poor and the marginalised of the state,” he said.

The UDP further urged everyone “that we must rejuvenate and present ourself as a more acceptable and strong political force to reckon with.”

Danggo’s supporters to decide on change of party