In Ritwik Ghatak’s Meghe Dhaka Tara (The Cloud-capped Star), the female protagonist Nita, a refugee from East Pakistan, tells her elder brother in exasperation and helplessness, “Dada, ami banchte chai (brother, I want to live).”
When Nila, the female protagonist in Uma Purkayasthya’s Bengali novel Uttaran (Passage), wonders why she was born at all to be condemned for life, she reminds readers of Nita’s struggles in the city of Kolkata (erstwhile Calcutta) in the 1960s. Nila and Nita’s stories reflect the struggles of every refugee from East Pakistan.
Uttaran is about Nila’s journey from a quaint and prosperous village in East Pakistan to the serene hill city of Shillong. Along the journey, Nila comes face to face with the darkest side of life that only strengthens her to move ahead. Her resilience grows with time and her conviction to challenge the abnormalities of society hardens.
Nila was a child when communal riots broke out in Sylhet in East Pakistan. One morning, her father’s close associate left a parcel on the doorstep. It was a regular shopping bag. Nila’s father had not returned the night before. Her mother opened the parcel to find her husband’s severed head.
The trauma haunted Nila for life. The memories of the subsequent years of trepidation and turbulence would recur through her journey. The gruesome riot made a deep impact on the child who would grow up with hatred towards a particular community.
Nila and her mother were forced to leave their home and belongings in Sylhet and take refuge in Assam. Their Assamese landlord and his wife helped them overcome the pain of separation from their homeland. Their love was salve on the wounds inflicted by a communal violence instigated by differences in religious beliefs.
However, peace was short-lived. While it was religious differences in East Pakistan which forced Nila’s family to severe roots with its ancestral land, it was language that created barriers in Assam. Once again, Nila witnessed the evil force that tried to destroy the minority with brutality. Rape, torture and destruction created mayhem across undivided Assam. Amid the turmoil, Nila’s mother remembered her homeland every day and pined to go back to East Pakistan.
The demise of her mother broke Nila from inside but could barely shake her conviction. She refused to conform to the societal norms and decided to be independent. Work brought her to Shillong, “about which I had only read”. 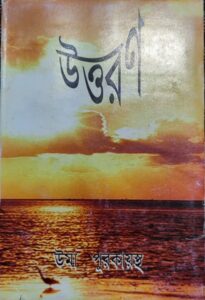 It was destiny that would bring Nila to Shillong where she would find her soulmate. It was in Shillong that she would revisit the horror of communal violence.
A chain of violence, a repetition of history and territorial politics — Uttaran is a reflection of a violent history that shaped a nation and devastated a region.
Purkayasthya, a veteran educationist from Shillong, wrote Uttaran, a lesser-known book even among Bengali readers, from her experiences in the Shillong of late sixties and seventies. During that period, the hill region not only fought for its identity separate from the state of Assam but also witnessed communal violence against non-tribals.
Purkayasthya draws similarity among communal perpetrators in East Pakistan, Assam and Shillong and delivers the message of humanity. Her narration of a West Pakistan armyman helping a local Hindu woman is contradictory to Nila’s hatred towards Muslims. “Can a Pathan armyman help us? How is it possible,” was the question that troubled Antu’s mother who was struggling to save her live in East Pakistan.
Nila did not give up even in the face of despair and dejection. She, like many non-tribals in the hill city, did not accept the mindless violence and the skewed social fabric that was defined by region and not humanity. The novel is a reminiscence of the turbulent times which turned tranquil Shillong into a necropolis.
Uttaran is also about the goodness in the bad, the ray of hope in the dark and the joy in the sadness. In her novel, humanity survives like oasis in a desert and among the politically motivated hoodlums in every community. Hence, an elderly Assamese couple, a Pathan soldier and a Khasi neighbour become the torchbearers of communal harmony in the novel.
The language of the book is lucid and conversational and brings a reader close to the characters, which gradually turn real and become a part of one’s life.
There is a need for translation of the novel so that the current generation of non-tribals is aware of the struggles of its ancestors and the young local population knows about the inhuman sufferings inflicted by its ancestors.
Violence begets violence. And violence must be tackled with love and forgiveness. A mammoth task for humanity but such an inconspicuous subject for individuals like Nila and her husband Utpal, both of whom decide to live in Shillong despite the castigation. At a time when the country is chequered by Hindutva, Purkayasthya’s book gives us the chance to introspect.

Make-up tips for a special V-Day