The installation of 250 litre water dispenser with RO purifier was carried out as part of Swacchta Action Plan of Power System Operation Corporation Limited( POSOCO) for 2021-22.

B. Lpyngkhoi, Member Secretary of  NERLDC, who was the chief guest appreciated the efforts of NERLDC in setting up the system.

Nabarun Roy, Executive Director, NERLDC said the crucial part of such CSR activities is the selection and identification of the right beneficiary.

He urged the school fraternity to make full utilisation of the system.

Head of HR, NERLDC VF Desouza acknowledged the efforts of the team involved in the project.

Government Boys’ Higher Secondary School at Mawkhar was established in 1880 and has around 600 students and 50 teachers. 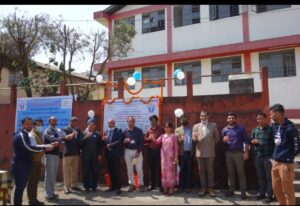 The Principal (in-charge) Ibalahun Kharduit thanked the organisation and said the school which is almost 140 years old, has been trying to keep up with the latest facilities to impart quality education to the children. However, the drinking water facility is the first one installed in the school and will now be an asset for the campus considering the comfort it will provide to the students and teachers of the school.

A similar facility was also set up at Kahilipara High School, Guwahati and it was inaugurated on March 5.

In a statement, POSOCO said it has been carrying out numerous such activities for the benefits of the communities  in other places like Bangalore, Mumbai, Kolkata and Delhi every year.

State to examine taking 60 MLAs to Delhi for ILP

State to waive off upfront payment to NEEPCO