The publisher of the book, Kaushal Goyal of Pigeon, India, and descendents of the freedom fighter were also present.

Goyal assured to pursue with the Centre for national recognition to Nonglait.

Nonglait had assisted freedom fighter U Tirot Sing against the British troops. She was also instrumental in killing 32 British soldiers in defence of freedom and Khasi dignity. 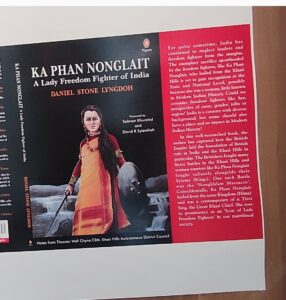 She was born in 1799 and died on December 6, 1850 at her Nongrmai village in Eastern West Khasi Hills due to prolonged illness.

On April 21, the union ministry of culture had recognised the state’s prominent female freedom fighter as ‘unsung hero’ during the conference  ‘Amrit Samagam held in Delhi.

Later, speaking to reporters, the relatives of Phan Nonglait, Reshningder L Nonglait and Magdalyne L Nonglait said the government should recognise the sacrifice of Nonglait and declare a holiday on her death anniversary.

State to waive off upfront payment to NEEPCO