Shillong, July 28: An armed branch constable (ABC) was among the two persons who were arrested by the East Jaintia Hills police in connection with seizure of drugs on Thursday.

East Jaintia Hills SP Jagpal Singh Dhanoa said in continuing campaign against drug menace in the state, the Anti-Narcotics Task Force  and Lumshnong PS of East Jaintia Hills, reacting on inputs regarding transportation of contraband items from Assam,  launched an operation from Wednesday night which continued till Thursday afternoon. 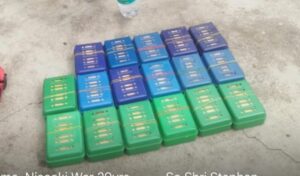 During the operation, the joint team under the leadership of Jason Myrom, DySP(HQ), Khliehriat managed to detect and apprehend one drug peddler 29-year-old Nisooki War (in picture ), a resident of Lamyrsiang village, East Jaintia Hills

From his possession, 17 boxes of suspected heroin (201 grams) and two mobile phones were recovered.

The SP said the vehicle being a  commercial one was not seized and drugs were being transported without the knowledge of driver or other occupants.

Further, based on the preliminary interrogation of the accused, the armed branch constable identified as Triplepearl Pasi of East Jaintia Hills police force has also been arrested for entering into criminal conspiracy, for aiding and abetting the accused in the commission of the crime.