The ride is also aimed at paying respect to the freedom fighters and armed forces veterans, including Meghalaya’s indigenous fighters who led the tribal resistance against the British in the 19th century.

The event is expected to promote a better understanding between the public and the Indian Army as well as to motivate the youth of Meghalaya to join the force. 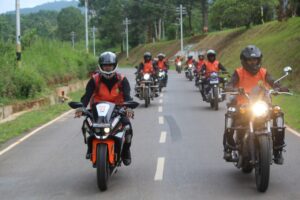 The ride will be flagged in on August 10 at Umroi by Governor Satya Pal Malik with a  military ceremony.

The team of 25 bikers will travel and touch down in all 12 districts of Meghalaya covering 1100 km in 8 days. The expedition team will visit the memorials of three famous freedom fighters of Meghalaya,  U Kiang Nongbah, Pa Togan Nengminja Sangma and U Tirot Sing. The 25 riders on behalf of Red Horns Visions will pay homage to these heroes who fought and sacrificed their lives as a strategic precursor to India’s freedom struggle against the British.

The expedition also seeks to complete a journey through Meghalaya to celebrate the monsoon in the state and promote it as a biker’s destination. The event will celebrate and explore the ravishing beauty of the abode of clouds by visiting the various unexplored  sites of Meghalaya.