Colombo, May 7 (UNI): The Sri Lankan government has said the State of Emergency declared by President Gotabaya Rajapaksa from Friday night was to ensure political stability in the country, even as several countries, including the US, the European Union, the UK and New Zealand have voiced their concerns over the move.

In a statement, the Sri Lankan government information department said on Saturday the emergency was declared effective from last night “with the intention of ensuring public safety, continuing the supply of essential goods and services uninterruptedly, and ensuring smooth public transport. The State of Emergency was imposed as a short term measure of easing the crisis, and it will be lifted immediately after the normalcy returns in the island”.

It also said the current agitations being held throughout the country, including the capital, for the last several days have posed a grave threat to the security of public life.

US Ambassador Julie Chung voiced concern over the State of Emergency being imposed. She said the voices of peaceful citizens need to be heard. “And the very real challenges Sri Lankans are facing require long term solutions to set the country back on a path toward prosperity and opportunity for all. The State of Emergency won’t help do that,” she tweeted.

The European Union delegation in Sri Lanka said emergency will certainly not help in solving the country’s difficulties and could have a counter productive effect. “A month of peaceful demonstrations has shown how Sri Lankan citizens fully enjoy their right to freedom of expression in the oldest democracy in South Asia,” the EU tweeted. 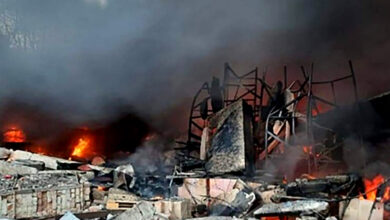 Russia ‘not obligated’ to cooperate with ICC on Ukraine probe