Octogenarian brothers Ahmed Husain and Afzal Husain turn Santa Claus when it comes to telling stories of old Shillong. Their bags are always overflowing with anecdotes about a city that is now busy severing its ties with history to waltz with mindless urbanisation.
The Husains’ century-old bungalow is invisible amid the bustle of Police Bazar until one peeks through the old iron gate that remains open for most part of the day. A visitor is always welcome. One can feel the warmth of the people inside even before entering the Assam-type house.
The family has immense contributions to the economic and cultural growth of the city. The Husains’ forefathers introduced the first horse carts and motor services between Guwahati and Shillong. Many studios in the city flaunt photographs of old motor cars and bullock carts taken by Kamakhya Ghosal, “a great photographer who was appointed by the British government”.
When Sunday Monitor met 86-year-old Ahmed Husain, he had just returned from a condolence meet organised for former MP BB Dutta, who was his contemporary. “I was remembering about the old days in the morning,” he said during the interview.
One a noted photographer and the other a passionate playwright, musician and thespian, the Husain brothers are the fifth generation in Shillong. Their great-great grandfather, Gulam Haider, came to the hill city from West Bengal in 1850. His framed photograph hangs on the wall along with his descendants’.
Afzal Husain (84) was busy and apologised for not being able to be part of the story-telling. “Please do not mind, I will talk for five minutes,” the thespian said as he sat down to reminisce about the days when Shillong was a cultural cauldron. He set the stage for a nostalgic journey before leaving for “an urgent work”.

Renowned photographer Ahmed Husain, a wonderful raconteur, first took up the camera in 1953 when he was in his early twenties. An award for a photograph of two black swans on the Ward’s Lake encouraged the young man to hone his skills further. The result was years of exploring the northeastern states and visually documenting numerous tribes.
The harmony among various communities and their cultural commingling were the first memories of the octogenarians. Though the Husains were a flourishing business family in the city, the members were gifted musically.
“My grandfather (Maula Baux) played the clarinet and was a regular face on stage. I remember a story that I had heard in my childhood,” said the senior Husain.
“It was 1905 or 1906, I cannot remember clearly. My grandfather had gone to Laban for a drama rehearsal. He had to come back before sunset but something delayed him and could not come out of the place where he went. This was because a tiger would sit near the place where the Civil Hospital stands today. The entire area was a forest. My great-grandfather had to send his employees with lanterns in search of his son. The tiger was sitting as usual but the animal fled when it saw so many humans with torches… This was the Shillong in those days.

Beautiful Shillong,” the story-teller narrated to an already rapt audience.
He remembered a bungalow at the Civil Hospital site that had “beautiful eucalyptus trees” and the forested Long Round Road near Polo Ground where only hunters ventured after the dark.
The face of the city has changed tremendously. The greenery and the wildlife have given way to concrete structures and modern facilities, which are intrinsic parts of development. The sparsely populated hills now sparkle with electric lights as human habitation

keeps growing by the day.
Ahmed Husain remembered the Wah Umkhrah that “flowed across Polo Ground and not along it”. His grandfather, Maula Baux, got the contract to divert the course of the river.
While the quaint hill habitation has turned chaotic, the vibrant cultural scenario here has become monotonous. The metamorphism of Shillong to become more West-inclined has led to apathy among a large section of people toward other cultures.
Talking about dramas, the younger Husain said Shillong had a voracious audience for dramas. “Both my grandfather and father (Aulad Husain) were members of Gitinatya Samaj, a drama company. Though Bengali dramas were in prominence, we had also staged Assamese, Khasi and Nepalese plays. Bengali (culture and literature) had a big influence on the various cultures and communities here,” said Afzal Husain, who had written, adapted and directed several plays as part of Manju Smriti Majlish, once a renowned drama group in Shillong.
He remembered how “puja time was drama time”.
“Every Durga Puja, we would stage a play at Opera Hall on Jail Road. We tried to continue the tradition till 1998.”
The playwright and thespian rued the waning interest of the new generation in stage plays, including Khasi dramas. The reason? The usual suspects — television, internet, and the deadliest of all, smartphones. In fact, these have also proved crucial in the city’s social transmutation, both at macro and micro levels. The feeling of oneness, hospitality and a sense of belonging have vanished over time.
“Those who lived outside the city for work or education would make it a point to come back to Shillong during the festivals to meet old friends and neighbours and be part of the celebrations with family,” said Ahmed Husain.

Ahmed Husain — who was a part of the North East Frontier Agency and had documented tribes like Apatani, Padam and Khamtis of Arunachal Pradesh — was in Kolkata when the liberation war in Bangladesh started in 1971. When he returned home, he could see how eager Bengalis here were to help their neighbours who were fighting a war. The mission was one — to save Bengali language. And yet the paths bifurcated.
“We were always part of every activity in the city but when the Bangladesh Sangram Samiti was started, we were not included in the activities. It pained us. Later, maybe in May 1971, a social activist named Anjali Lahiri, wife of former advocate general of Meghalaya Hiren Lahiri, approached us and we started work for the homeless from Bangladesh,” said Ahmed Husain.
A handful of like-minded people came together to start social work. Among the active members was Nilkamal Dutta, a journalist with now defunct newspaper Amritabazar Patrika in Kolkata. The group managed to get help from Irish organisations which sent aid to people living in refugee camps outside Shillong.
The Mukti Fauj members of Bangladesh would have meetings at Husains’ house. Ahmed Husain started travelling with the Fauj members not only to their training camps but also to the warfront. “I went around taking photographs. It was an experience, both good and bad. Good because I met so many young and brave soldiers and bad because I saw a man die from gunshot. I had also seen many young men’s bodies,” he remembered the struggles in Bangladesh.
Husain and his social worker associates also helped in the burial of unclaimed bodies. The incidents are still vivid in his memory.
“One night, Nilkamal Dutta rang me up and said we had a job to do. On enquiring, he said we had to bury the body of a Mukti Fauj member. I asked him to send the body to the Police Bazar mosque. We were taken aback when we saw it. It was of a boy who died from gunshot. Blood was still oozing when we got the body. We buried him in Mawprem graveyard. I neither took a photograph nor I enquired about the boy’s identity,” he said.
Bodies piled up in the next few weeks and the young social activists continued to organise quiet burials.
The Bangladesh government recognized the Husain brothers’ service during the war in 2012.

Ahmed Husain has also documented the joyous moments of Meghalaya’s statehood in 1972. He said the agitation was always peaceful “but I could not document that”.
Husain informed that every time he had tried to take a photograph of the peaceful protest, he was politely denied permission. “No one was allowed to take photographs. But there should have been some records for the future generations.”
However, he got the opportunity to photograph the inauguration of the state. The function was attended by then Prime Minister Indira Gandhi. “The gathering was huge and peaceful. People here are really disciplined.”
The young photographer was carrying three lenses on that day, a 35 mm, a tele-lens and a 120 mm. “I still regret losing the 35 mm lens in the melee. Of course, I did take Indira Gandhi’s photographs. I had travelled with the prime minister before that when I was associated with NEFA,” he smiled.
Ahmed Husain took a break from his recollections and brought out a few photographs from a yellow envelope. Those were not mere pictures of people and places but documentation of history and the changing times.
It was already dark outside but memories had just begun to rush in.
A Khasi man, clasping on his wooden smoking pipe, looked intently out of a photograph. Probably the picture tickled Ahmed Husain’s memory and he got ready to share another anecdote.
“I knew a Khasi man who was very humble. He always said one must not boast about one’s talent or achievement. After so many years, when I look at my photographs and think about my journey, I remember that man and wonder what I have achieved,” he paused. The interview was over but the conversation was not. 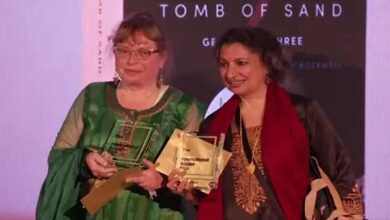