Shiillong,Sept 10: The Voice of Mawlai People has deposited knives at the gate of Meghalaya Secretariat on Friday in the presence of security personnel.

The symbolic protest was to mount pressure on the state government for the suspension of the police personnel involved in the  killing of the former general secretary of Hynniewtrep National Liberation Council (HNLC) Cherishtarfield Thangkhiew. 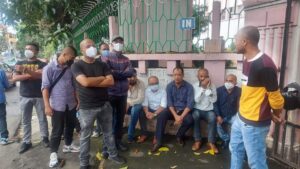 All the knives collected during the recent knife surrender rally in Mawlai were deposited in a surprise move intended to ridicule the police version that the former HNLC leader challenged the police with a knife resulting in the firing on August 13. 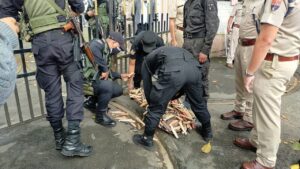 National anthem gets a traditional touch in Meghalaya Assembly

Two portions of Shillong-Dawki road to be re-tendered

MMSA threatens to agitate over humiliation of Dr War