Shillong, Sept 23: Police have seized drugs worth over Rs 18.33 crore and arrested 134 traffickers during the past four months.

“We have waged a war against drugs throughout the length and breadth of Meghalaya. During the last four months -from June to September- we have recovered drugs worth over Rs 18.33 crore. This is a huge recovery and credit goes to the state police, anti-narcotic task force as well as special branch for timely collection and dissemination of intelligence,” Director General of Police (DGP) Dr LR Bishnoi said while addressing a press conference, on Friday.

As many as 134 drug traffickers have been arrested in 48 cases registered so far.Among them 123 are from Meghalaya and 11 from other states like Assam, Manipur and Arunachal Pradesh, which indicated that the drug traffickers are inter-state gangs. 125 are males and 9 females.

There are five repeat offenders and booking them under the NDPS Act is under process.

“Out of 48 cases, 50% are registered in the East Khasi Hills and the next highest registration is in West Garo Hill followed by Khliehriat in East Jaintia Hills, Ri Bhoi and West Jaintia Hills,” he said.

“18 out of 76 police stations have shown registration of NDPS Act cases. Therefore, we will concentrate on these 18 thanas to break the supply chain of the drug traffickers,” the DGP said.

He said East Khasi Hills police launched a massive operation in Mawlai and surrounding areas while the whole town was sleeping on Thursday night. 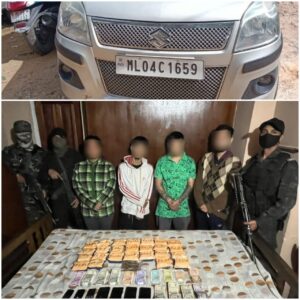 The police have also launched a drive against bike lifters mostly from Tura and Shillong.

During the last four months, the police have recovered 141 stolen bikes, arrested 61 bike lifters and registered 90 cases against them, the DGP said.