DGP LR Bishnoi addressed a press conference on Thursday to announce the seizure during the operation which began from Wednesday evening till Thursday morning.

According to the police, after receiving information from a credible source that a peddler by the name of Gary would be proceeding from Jiribam to Shillong via Silchar carrying a consignment of suspected illegal contraband, the police set up check point in different areas.

The information was conveyed to s senior officer who authorised the ANTF team and staff of Khliehriat PS along with SI. B. Marbaniang to conduct checking near Khliehriat PS of all the vehicles coming from Silchar and proceeding towards Shillong.

Around 3.50 am on Thursday, a white/grey colour Jagannath travels and tours bus B/R No. ML-05-L-7887 was stopped and on enquiry from the conductor, he revealed that there are two Khasi men travelling on the bus. Further, on questioning, them inside the bus, one of them revealed himself to be Gary.

After the arrival of independent witnesses, the suspects Garry Kharnaior (30), a resident of Mawlai Stand Bus and Kmenlang Shabong (20), Mawlai Mawdatbaki were searched and two bag packs – one black colour bag and one blue/black colour bag respectively were found from their possession.

In the bags 34 and 26 soap cases wrapped in black polythene containing yellow/orange powder were recovered from them respectively along with 30 nitrazapam tablet strips from the blue/black bag pack. The suspects and the bags were then shifted to Khliehriat PS. The contents of the soap cases were then emptied into two separate transparent polythene bags and preliminary tests were conducted on the yellow/orange powder in the presence of independent witnesses.

The tests indicated positive result for heroin. Thereafter, the transparent polythene bags were then weighed separately with one bag weighing 386 gms while another bag 290 gms.

Altogether, 676 grams of heroin and 30 strips of Nitrazepam tablet were seized.

In this connection, a case under Khliehriat PS has been registered.

The DGP also felicitated Additional SP Banraplang Jyrwa and 35 others who were part of the joint operation that led to the arrest of the drug suppliers. All were presented with the DGP’s commendation certificates and cash awards.

“The war against drugs and operation will continue. As a matter of policy, we have decided that whoever will do good work from the police or the intelligence branch, they will be instantly rewarded,” he said. 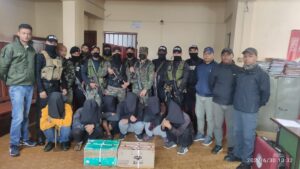