The pandemic last year posed an unprecedented challenge for frontline workers, both healthcare and police, who struggled to keep citizens safe despite facing the risk of contagion. Their yeoman service continued the year after when the second wave of Covid-19 pandemic hit the state.
The police personnel are among the frontliners who had the mammoth task of not only maintaining law and order but also making citizens aware of the healthcare guidelines to be followed during the prolonged lockdown. ‘New normal’ is the moniker given to the pandemic and the post-pandemic situation and policing the ‘new normal’ will not be a cakewalk, even for the seasoned cops.
Recently, the Meghalaya Police Department came out with a handbook, ‘Covid-19: Policing the New Normal’, which gives facts about the pandemic, preparedness of the police personnel and analysis of the department’s performance.

‘Leadership is the capacity to translate vision into reality’. ~ Warren Bennis
It is not just a quote in the handbook but an action plan that was well executed by the ‘leadership’. The department, besides protecting the hoi polloi, ensured that its frontline workers and their families were safe. Of the over 14,000 personnel, about 1,600 were tested positive during the first and the second waves. It was a war against an unknown enemy and many succumbed to the deadly virus. East Khasi Hills in particular recorded the highest number of police personnel getting infected. 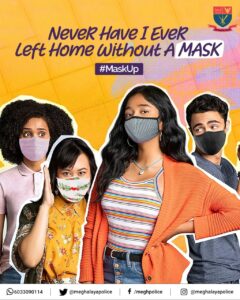 However, the department showed alacrity once the vaccination drive was launched worldwide and ascertained full inoculation of over 90% of its frontliners. While the positivity rate went up in the second wave of the pandemic, the inoculation drive continued with full momentum within the force.
Apart from safeguarding its field workers, the department continued with its civilian awareness programmes to ascertain that the citizens follow all the regulations while in public space. The regular duty of maintaining law and order was simultaneously performed. Social media became the department’s nifty tool to reach out to people. It crafted short and witty messages to nail the point — the danger is not over.
“We are all involved in writing social media messages and designing the templates. There are young officers who help in designs. Social media have proved to be a good platform to reach out to the mass and we followed the popular pattern of sending out important messages — short, witty and to the point,” GK Iangrai, assistant inspector general (A), told Meghalaya Monitor in the beginning of the year.

‘The secret of crisis management is not good vs bad, it’s preventing the bad from getting worse.”
~ Ken Matos

Another profound statement that the department followed to a tee. With the outbreak of the pandemic, over 14,000 officers and personnel of the department, along with healthcare workers, started their fight against the virus. This not only exposed the frontline workers to the virus but also put their families at the risk of getting infected.
A need was felt to put in place an enhanced mechanism to monitor the health and well-being of the field workers. A Covid-19 control room was set up at the department headquarters in the city on March 27 last year. The control room was mandated to collect, collate and disseminate information about the spread of the pandemic on a day-to-day basis to assist supervisory officers at different levels in making relevant interventions 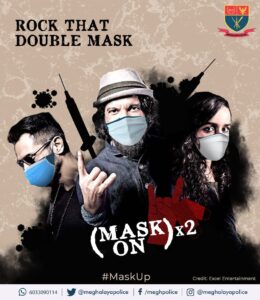 and taking corrective measures to effectively contain the spread of the virus.
The control room took out regular bulletins and compiled data which helped policymakers to take action. To further strengthen the online monitoring mechanism, the department started a Covid Management portal that was inaugurated by DGP R Chandranathan on July 20 this year. The portal not only helps keep a track of infected police personnel but also ensures that the affected frontliners get health advisories and the high-risk contacts are traced.

‘Challenge and adversity are meant to help you know who you are. Storms hit your weakness, but unlock your true strength.’ ~ Roy T. Bennett
The department’s field workers could maintain sangfroid even in the face of challenges. The biggest challenge for cops in Shillong and other parts of the state was to implement the several health directives issued by the government.
The police headquarters in the city formed health and hygiene committees in all the districts last year. The committees were entrusted with the overall responsibility of spreading awareness among police personnel and monitoring whether they were following all the guidelines. Data would be sent to the control room daily.
The department also started a Meghalaya Police Relief and Welfare Fund. About Rs 79 lakh was raised through voluntary contributions and 50% of the money was given towards treatment of police personnel affected by Covid-19. The fund is for personnel across ranks.
The department, which was already overwhelmed with tasks, engaged the community in its fight against the pandemic. Prolific civilians were trained and tasked with enforcing lockdown when the pandemic was at its peak. The strategy proved successful and the burden on police personnel was mitigated.
The department also held several seminars, both internal and external, for awareness on the pandemic.
Talking about the handbook, DGP Chandranathan said, “Considering the whole gamut of activities that the police has been engaged in since the outbreak of the pandemic, it was felt documenting the efforts made would immensely help in identifying the gaps and formulating future strategies.”
The fight is still on and the department’s war room is still abuzz with suggestions and strategies. With the festivals nearing, it is even more active to maintain law and order and ensure the spread of the virus is checked. It not only has a mission to overcome the healthcare crisis but a plan in place to accomplish it. As Kiran Mazumdar-Shaw put it, “Ultimately, the greatest lesson that Covid-19 can teach humanity is that we are all in this together.”

Dancing her way to glory