The survivors of the Covid-19 pandemic will one day narrate to the future generation the horrific and traumatic experience of fighting the deadly virus. They will narrate the loss and talk about mankind’s helplessness in the face of the grave crisis and how it finally overcame it. Ambinna Saki, or Witness for the Future, a new music video that was released recently, talks about a time when the world will look back at the sufferings of people and how mankind triumphed over the invisible enemy.
Directed by Dominic M Sangma, the music video in Garo language was “a mission” for the crew. Anon Cheran Momin, a young musician who had worked with Dominic in his award-winning film Ma.ama, was working on a project for NE Archive, an initiative by the Department of Mass Communications at St Anthony’s College, last year. He had approached the director with the request to write the lyrics.
The singers are Gabriel G Momin and Winselana D Momin.
“In the beginning, I was not sure that we would be turning it into a video. Once the whole song was composed, I quite liked the way it turned out. Everybody was and is affected by Covid. The whole experience is painful and suffocating… So I decided to turn this painful experience into an artistic expression and I told Anon that I would shoot the music video for free, if they were ready to commit themselves to achieving what I envisioned,” Dominic told Sunday Monitor.
The shooting started last September but was delayed owing to the pandemic-induced lockdown.
Talking about last year’s experience, Dominic said he could not start work on his latest film and “there was nothing to do”. “I am a creator, if I don’t get to create I start having existential crisis and it’s unbearable,” he added.
Ambinna Saki is Dominic’s first music video and it was a challenging task for him to find a local crew for the same. It was during his hunt for the best crew members that he met Jaksram K Marak, who shot the video, edited it and made the short animation in the beginning of the video.
“I was a big fan of Dominic Sangma and it was amazing working with him,” said Jaksram.
For Jaksram, the music video had a personal resonation. A month after the shooting started last year, his father, Endrick Gabil Momin, started showing symptoms and later the family got afflicted by Covid-19. Earlier this year, he died of other complications.
“It was hard for me to focus on the music video in such a critical time. But Dominic and others helped me fill the void that was created by my father’s death,” said the young cameraman.
Ambinna Saki is about a man in future who describes the pandemic, how it imprisoned people in their own home and how lives were lost in the battle against the virus.
The video was shot in various localities in Shillong. The budget was nominal and the team had to innovate to perfect the video. “In one of the shots, I wanted rain but we had no budget to make a rain machine. Gaido Debra Sangma (the art director) said he could make one, and the next day, he surprised me with his DIY rain machine… Many people, after watching the video, told me that it looked expensive,” Dominic said. 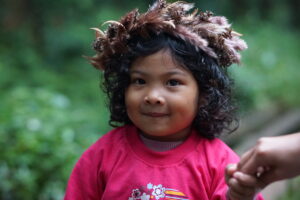 He recollected another incident where the crew faced a crisis when one of the camera lenses broke. “I told my cameraman to use the broken lens and we realised it was giving us nice effects.”
In another scene, the director wanted the child actor, who is Anon’s niece, to cry. “She is a very good actor. Before the shoot, I told her that I wanted her to cry in front of the camera and she said ‘yes’. I really wasn’t sure whether we would achieve that. And it was one of the most important scenes in the music video. We rolled the camera and when I said action, she started crying and everybody 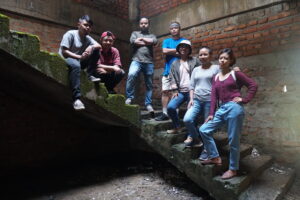 was so emotional seeing her cry that some of the crew members also shed tears during the shoot. As soon as I said cut, she was running around in the set,” said Dominic.
Jaksram, who is a self-taught cinematographer and animator, said the music video was the first project that gave him a vast opportunity. “Dada Dominic had a vision and he pushed all of us to give our best. I am grateful to him for the work I produced,” said Jaksram.
When asked about his personal experience, Jaksram said he could not focus on the work for some time after the death of his father. “He is there in one of the scenes. But a month after the shooting of the scene, he started to show symptoms. I started having mixed feelings about the project as I kept thinking that it was probably the project that caused the tragedy. I was traumatised,” remembered the 28-year-old cinematographer.
The music video has been dedicated to Endrick Gabil Momin.
The most challenging part for Jaksram was to work beside Dominic, who envisioned every scene, described it to the young assistant and let him take over. “He would also take my suggestions at times and that was flattering,” he added.
The crew was small but close-knit and everyone took up all kind of tasks. “It was like we were on a mission,” said the director.
The song was sponsored by NE Archive but for release, Dominic approached the state government. “I told them that the music video was ready and if they liked it they could use it as a public message. However, there was no response from the authorities. So, we just released it on Anon’s YouTube channel,” Dominic, who was all praises for the young team, said.
“We shot with almost no budget but we had passionate people working to achieve what we envisioned and wanted to do something during this pandemic to share with others,” he added.

Will TMC flower bloom in Meghalaya?