Shillong, Sept 13: Nepotism in Indian sports is not new and the latest example is of archer Sorang Yumi from Arunachal Pradesh, who was ignored during recruitment of coach in the state despite she being eligible under the Khelo India scheme.

It also sent a letter to the director of the Department of Sports, Tadar Appa, on September 8 asking for re-evaluation of recruitment results.

In her complaint letter to the officer-in-charge, SIC (vigilance), Yumi alleged nepotism saying the person, Taba Nikia, who was given preference over her is the brother-in-law of the director of the Department of Sports, Arunachal Pradesh.

Yumi, who has two international and 20 national medals to her credit, said she attended the walk-in interview that was advertised on December 29 last year for the post of six coaches in various disciplines.

“I met all the criteria. But the recruitment was not done following the rules. As per the Khelo India scheme, first preference must be given to individuals who represented India in international competitions under recognised sports federations or associations. Second preference is given to medal winners in national championships. As per the advertisement, we were asked to bring certificates and there was no mention of mark system. However, I later found out that they have followed mark system,” Yumi told Meghalaya Monitor on phone from Itanagar.

The selection result was released in March this year.

Yumi added that the person selected for the post does not have any national or internal medal.

The young archer is the first from Arunachal Pradesh to win team gold medal in the National Games, 2015, and also the first and only archer from the state to win individual silver in the same National Games.

In her complaint letter, Yumi said the director “misused his power” to recruit his relative. She also filed an RTI query and found out that the director was the chairman of the recruitment process despite his relative being one of the candidates.

Sorang Tada, Yumi’s uncle who encouraged her to take up archery, said they have given a representation to the governor of the state, the chief secretary and the sports minister, among others, asking for a proper inquiry into the matter. 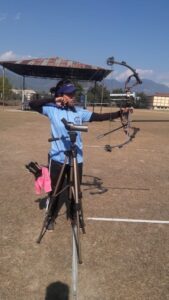 “It is not about the job. It does not matter. When the advertisement was for coaches, then why was the person recruited as an instructor? We want proper investigation because this incident has affected Yumi and junior archers in the state,” said Tada.

When contacted, director of Sports Authority of Arunachal, Gumnya Karbak, said he has already replied to the showcause notice.

The reply was, “Selection of past champions athletes is the prerogative of the concerned central/state Sports Department.”

Tada said Yumi was always a talented archer, which is traditionally a male bastion in the state. “She was a tomboy and wanted to pursue archery. We lived in a remote area where there is no motorable road. So, we had to travel for days to reach the training centre. Later, we shifted to Itanagar for her training,” he added.

Letters were sent to Sports Authority of India and the Archery Association but no reply has come so far.

Yumi said earlier too she had become victim of discrimination. She added that she was promised several facilities to facilitate her college studies but nothing has happened. She had also missed an international championship because “I was not informed about the selection”.

In 2013, Yumi and another archer, Maselo Mihu, had missed their China trip because of stapled visa problem.

Tears swell up as Mukul speaks about Khasi-Jaintia-Garo unity 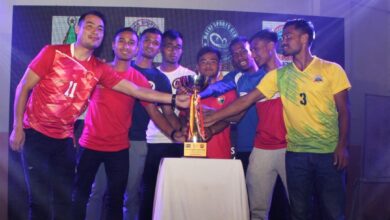