Shillong, Aug 19: A coal miner was killed and another injured in Shallang,West Khasi Hills on Thursday night.

Illegal coal mining was banned by both the NGT and the Supreme Court.

When contacted, Momin said three miners from his constituency had gone to the mine in Shallang

“While one was killed, another was injured and the third  escaped unhurt”, he added.

The SP of West Khasi Hills, Herbert Lyngdoh said, “My officers are on the way to conduct enquiry…it is remote and have to trek for two hours”. 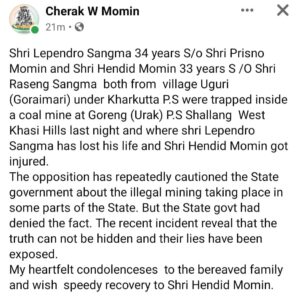 “While Lependro died and Hendid was injured, nothing happened to  the third worker”, he added.

Cherak criticised the government for not acting against illegal coal mining though the Opposition had raised the issue time and again.

According to him, the government is always on a denial mode.