Over the years, people hailing from West Khasi Hills have come to relate themselves as ‘ngi dei ki nong west’ or ‘we are people from the West Khasi Hills’. There is a sense of identity and pride among the people residing in West Khasi Hills of the state of Meghalaya which is quite distinctive.

By saying this, I am not regionalising people of West Khasi Hills from the rest of the state but simply asserting its stand. On October 28, 1976, West Khasi Hills District came into existence. Many eminent personalities — like Tirot Sing Syiem, Ka Phan Nonglait and Sngap Sing Syiem — who constructively impacted the people in the state in numerous ways were from West Khasi Hills.

Wickliffe Syiem of Hima Nongstoin, who strongly opposed annexation of Hima Khasi to the British dominion, and Hoping Stone Lyngdoh, the chief organiser during the Hill State movement, laid the foundation for the unity of the people of West Khasi Hills. Not to forget, there had been numerous unsung volunteers from the region who had selflessly contributed to the formation of Meghalaya on January 21, 1972. It makes me proud to think that this part of the state has begot courageous and intelligent men of integrity.

After 36 years, on August 3, 2012, South West Khasi Hills District was inaugurated in Meghalaya.

There had been dispute as to why this new district in 2012 bear the words ‘West Khasi Hills’ after the word ‘South’. In response, the people from South West Khasi Hills had said since the district was born from West Khasi Hills, they would still want to be linked to the name for the love and respect they have for West Khasi Hills district — the kind of respect that goes a long way despite having varied differences in location, jurisdiction and administration.

For almost after 45 years in progressing, on November 10, 2021, another district, Eastern West Khasi Hills, with its headquarters at Mairang was inaugurated by Chief Minister Conrad K Sangma in the presence of Metbah Lyngdoh and Brolding Nongsiej as legislators from Mawthadraishan and Mairang Assembly constituencies, respectively.

This new district is an outcome of an amalgamation of Mairang civil sub-division inaugurated on November 10, 1976, and the Mawthadraishan C&RD block.

There had been a few sections of people who varied in their opinion on the selection of the name ‘Eastern West Khasi Hills District’, which is not relevant at all.

I lived in Mairang for so many years and it is like my hometown. People from this area are committed, hardworking, straightforward and determined. At the same time, I am well apprised about Mawthadraishan because it is close to Mawkyllei village where I was born and brought up.

As a responsible citizen of Eastern West Khasi Hills, irrespective of any differences, I would like to congratulate Metbah Lyngdoh, the former Minister of Tourism and the current speaker in the Meghalaya Legislative Assembly, and Brolding Nongsiej, Minister in charge of Water Resource, Home Guards and Civil Defence, in fulfilling the demand and aspiration of the people.

Eastern West Khasi Hills is indeed people’s choice district because its creation is a much delayed and long anticipated aspiration. Historically, Lyngdoh and Nongsiej are the only two legislators from two respected constituencies who fully exercised their power according to the people’s choice.

I would like to conclude by saying that it may be unreasonable for those who have had a different opinion and their opinion was not met accordingly but men at work earn their highest credit by working hard to make things happen. Afterall, living in a democratic country, everyone has the right to come out with their opinion and when it is people’s choice, it is their victory too.

(The author is an advocate in the Supreme Court of India. He can be reached at danielstonelyngdoh@gmail.com)

Will TMC flower bloom in Meghalaya? 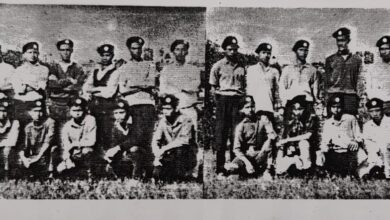