After the day’s blazing sun, cumulonimbus had started taking shape, sending out the message for a torrential rain through intermittent lightning. The darkening horizon visible from the bank of the Umiam was intimidating, especially when one had to take a canoe to Nongmahir island on the lake.
The boats anchored near the shore quivered as the wind created ripples on the water. For doubtful minds, the seasoned boatman’s assuring smile was a relief. Visitors were in safe hands.
Nongmahir is over 40 km from Shillong and is gaining popularity among local tourists and picnickers. One has to cross Kyrdemkulai to reach Nongmahir village from where one can avail the boat service. It takes less than 10 minutes to reach the island in Umsning in Ri Bhoi district. 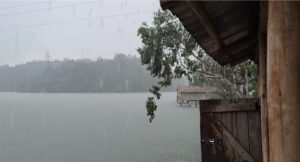 There are at least four canoes which ferry passengers to the island. The bamboo bridge that ends in a thatched resting place extends on to the water. Several bamboo huts scattered on the island are meant for picnickers to relax and have food. Some of them have provision for cooking or campfire.
A muddy path went down to the water where the boats were waiting for passengers. The sky was overcast and it started drizzling by the time the boat crossed halfway. Soon after it touched the shore on the other side, the cumulonimbus loosened its grip. There was no other option but to run for an empty hut. But on the penultimate day of the Durga Puja festival, the island was abuzz with visitors who had already occupied the shelters.
One hut, comparatively larger in size, seemed floating on the water. A close look revealed that this structure too extended on to the water. There were two bedrooms and a sitting space with bamboo benches — a perfect refuge for the drenched souls.
The hut, which is meant for tourists planning to spend a night or two on the island, is spacious, clean and well-maintained. However, the toilets are outside the hut. For the adventurous types, this could be a perfect place to spend a few days away from the bustle of the city.
From the small bamboo windows of the hut, the dark sky looked frightening. Flashes of lightning threatened to end the ‘dark’ spell as thunder rolled in defence. The trees on another patch of land on the lake were already enjoying the conflict up above and they swayed together vigorously. The water of the lake looked oblivious to all the humdrum and it just wanted to enjoy the torrential rain, breaking out in ripples of laughter and excitement. The fallen leaves and a lost balloon bobbed on the surface. But the sound of the rain on the tin roof of the hut drowned all the excited noises outside.
The island is managed and maintained privately by Chester Thangkhiew. There is no provision for readymade food and one has to contact the owner of the island for meals. But in his absence, there is no front man to take care of the amenities.
Thangkhiew, a jovial man who loves to entertain his guests with music and songs, was in town when this reporter visited the island and several attempts to contact him went in vain. With a feeble mobile network on the island, it became even more difficult to connect to him. Hence, it is advisable to carry edibles for a day’s trip to the island or contact the owner weeks before a night-stay is planned.
The electric wires also looked precarious and inadequately protected from heavy rain. More care must be taken to avoid accidents. The toilets did not have water on the day the reporter visited the place. Life jackets too were not enough for all visitors.
A word of caution — for those who will be visiting the place for the first time should not be distracted by villagers at the entrance of Nongmahir who try to misguide tourists about parking their cars. There are two points for taking a boat ride and vehicles can travel to the closest point. There is a humble eatery on the shore and one can pick up food from there.
The rustic beauty of the place and the remoteness add another dimension to the island adventure. But as infrastructure is yet to be developed, one has to go prepared, especially when travelling with family and children. Though most of the visitors were locals, Nongmahir can become an attraction to tourists from outside with the help of the state government.

The call of the wild