Shillong, Aug 27: The ‘voice of Mawlai people’, an umbrella body of 11 organisations, seeking justice to slain Cherishstarfield Thangkhiew, has decided to write letters to all the MLAs from Khasi-Jaintia Hills on Monday raising their demand to punish the police officers involved in August 13 incident .

The group also wanted the MLAs to take up the matter in the Assembly. 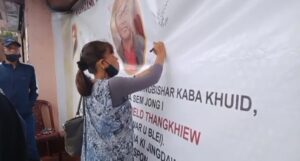 Candles were lit by people to express solidarity to the cause. The headman of Mawlai Phudmuri, Silvester Kurbah also extended support.

After HSPDP, UDP wants Guv role in place of President

Three resigned MLAs to join BJP in Delhi before Dec 7