Shillong, Dec 10: The MPCC president Vincent Pala and CLP leader Ampareen Lyngdoh are hopeful that the 12 defected Congress MLAs will be disqualified.

“I am very confident that they will be disqualified at any cost,” said Pala after the party submitted the last batch of petitions before the Speaker seeking the disqualification of two remaining members who include Nongthymmai legislator Charles Pyngrope and Sutnga-Saipung legislator Shitlang Pale.

While disagreeing with the stand of the Deputy Chief Minister in-charge Parliamentary Affairs Prestone Tynsong that the 12 MLAs are not subjected to disqualification, Pala said that as per the Tenth Schedule, a merger has to be party to party.  “There is no denying the fact that the 12 MLAs have got the numbers to split the party but they should come out of the Congress, form a party and that party will merge with another party.”

“I have discussed this issue with many of the lawyers in Delhi, who said that hundred percent these MLAs will be disqualified because the system they have followed is not as per the Tenth Schedule,” he said.

Pala said this is not the first time that people left the Congress. “When late PA Sangma left the party they also said Congress will be wiped out but Congress is still there ,” he said. 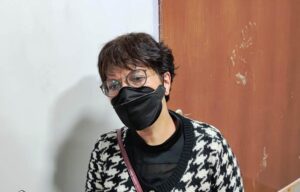 Ampareen, after submitting petitions against Pyngrope and Pale, said, “We are very confident that our petitions stand tremendous merit while interpreting the Tenth Schedule to the Constitution of India.”

Initially, former Chief Minister Mukul Sangma along with nine other legislators had submitted their replies to the Speaker following the petitions filed by Ampareen.

Ampareen said there has been a lapse in the exit of the 12 MLAs to the AITC and added that  sub para 2 of para 4 of the Tenth Schedule clearly indicates that defection would only become effective if it is from a parent party and those who defect should form a party and then merge with another political party.

She also said another area which the party feels required attention is the meritorious ground that there was no resignation, no discussion, and no dialogue with the parent party.

“We also feel alongside the two-third which is a compulsory occurrence for defection of this nature, there are other gray areas in the Tenth Schedule which gives us enough confidence to believe that all these areas where we feel that there was no justice in this breakaway group but in fact it is a big betrayal, it is a big let down to the party which elected or gave them an opportunity to be elected to the legislative assembly as representatives of different constituencies by the Congress which is the parent party,” she said.

In response to the comments of Mukul downplaying the complaint of the Congress, Ampareen said, “We don’t want to react to baseless comments made by senior people who have benefited greatly from the Congress party in their entire tenure of service for the people of Meghalaya. They may be free, they may feel free, they are free to comment as per their own wisdom but call this a ploy or call this an opportunity, it is just two sides of the same mirror, to X it could be seen as a ploy but to us this is our strength,” she said.

The CLP leader said the last two petitions have been duly modified to include more areas which would become more effective in a show cause notice scenario.

To a question, Ampareen said, “Yes you have an absolute two-third number but have you taken all necessary steps that will ensure that the two-thirds who have broken away will not face disqualification. We have put forward our arguments very clear no ambiguity and we are confident that this would be the first step in a series of fights against individuals who have attempted to desert a party that has nurtured them and has made them who they are today in the political scenario in the state of Meghalaya.”

As the entire political gimmick is getting out of hand, the CLP leader also appealed to the people of Meghalaya to take note of all the steps taken by the Congress to fight for its rights.

Heard AITC will finance Rs 200 crore and defected MLAs to get Rs 5 crore each: Timothy