A “spiky and horrible” virus vs the mankind. One vaccine and a plethora of misinformation. Irresponsible many vs the indomitable spirit of a handful. Dr Naomi Bhuyan’s new play, Questionable Corona, is about the various aspects of the pandemic that has redefined ‘normal life’.

Bhuyan, an associate professor of English and a well-known playwright, staged the play on the occasion of William Shakespeare’s birth (April 26) and death (April 23) anniversaries. It was jointly directed by Bhuyan and Bryan Dunlee Wahlang. Organised by the English Department of Sankardev College, the performance took place in the campus. The college’s Diamond Jubilee celebration was also part of the event.

Questionable Corona is the first play in the region that dealt with the subject of pandemic and raised pertinent questions about the crisis. As the humans (Omega played by Bhuyan, Alpha played by Lapynshai S Marak and Zeto played by Anthony S Marak) blamed Corona Virus, played by Reynold Jones Lyngdoh Nongbet, for killing people and putting mankind through a difficult time, the Virus questioned their greed and ignorance.

The humans complained about the forced social distancing, lockdowns and mental illness that the pandemic caused in the last two years. They pointed out how the poor suffered during the lockdown as there was no source of income. The Virus not only separated them from their loved ones but also affected education and the economy, they said.

The Virus, on the other hand, blamed humans for bringing him to life and warned them about his power and army in the form of variants. The humans fought back saying they have the vaccine to protect themselves from the deadly germ.

As the Vaccine, played by Euan S Kharmon, entered the stage, the Virus reminded him about how people are being misinformed about the antidote. An enraged Vaccine then chided the humans for consuming false information about the effects of the inoculation and scoffed at their ersatz superiority.

The play, which is Bhuyan’s first dark comedy, becomes important at a time when many are apprehensive about the Covid-19 vaccination, which is the only way to develop herd immunity and prevent the virus from spreading. Several fake news were being shared on social media after the vaccine was introduced. While some claimed that the vaccine would lead to infertility and stunted intelligence, some blamed the vaccine for the deaths which occurred post-inoculation. 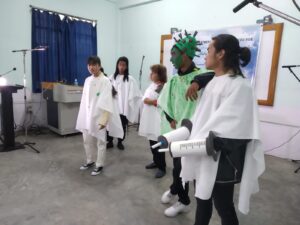 It also sends out an important message that the threat of the virus is not yet over and individuals and governments should not be lackadaisical about the protocols like wearing masks, sanitising hands and maintaining physical distance. The play is also a reminder that pandemics may occur anytime if humans continue with their greed and keep destroying nature mindlessly.

The occasion on which the play was staged was also apt as Shakespeare lived his life amid the threat of bubonic plague. While the epidemic killed about a fifth of the population of Stratford in 1564, the life of infant Shakespeare was spared. According to theatre historian J Leeds Barroll III, that between 1606 and 1610, during which Shakespeare wrote and produced some of his greatest plays, “the London playhouses were not likely to have been open for more than a total of nine months”.

Bhuyan, who is known for her stage and street plays on social issues, said before the performance, “This play is different from what I have had done in the past. The pandemic and the related issues made me think deeply about the crisis we are facing. Questionable Corona will not only make you laugh but prompt you to think about the various aspects of this crisis.”

Most of the actors were first-timers but their performance was laudable. Reynold, who has been part of Bhuyan’s group Class Act for years now, and Lapynshai were especially a pleasure to watch. The props, created by Bhuyan’s former student and NSD alumnus Bryan, were simple and complemented the complex subject of the play.

There is no doubt about the corona virus’s severity and presence but what remains questionable is how much humans have learned from this pandemic and whether this learning will help them make the right decisions when another pandemic strikes.

Find skin coolants for summer on your kitchen shelf