Bernard had already cried foul over the raid stating that he is being targetted by the Chief Minister Conrad Sangma ,who may face defeat in the Assembly polls in 2023 from South Tura.

“From the materials recovered at Rimpu Bagan, as well as the design of building etc., it appears that the place was being used by Bernard N. Marak @ Rimpu and his accomplices as a “BROTHEL” for the purpose of prostitution. Therefore, a case vide Tura Women PS Case No. 105(07)2022 u/s3/4/5/6/7 of Immoral Trafficking (Prevention) Act, 1956 has been registered and being investigated. All 73 detained persons have been arrested and being forwarded to the court. The main accused namely Bernard N. Marak @ Rimpu was verbally instructed to cooperate with the investigation and surrender himself at Shillong Sadar police station immediately. However, he has not cooperated and is evading arrest at the time of issue of this press release”, said West Garo Hills SP VS Rathore in a statement issued on Saturday. 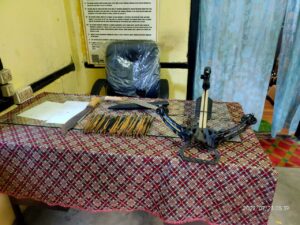 Rathore said  an FIR was received on February 28 this year that the minor daughter of the complainant was missing from home for one week and on that day, the relatives of the minor traced her along with one suspect and handed over to Tura women police station. Later, it was ascertained that the minor was sexually assaulted multiple times over one week. Accordingly, a case was registered as Tura Women PS Case No. 24(02)2022 u/s 366A/376 IPC r/w 5/6 POCSO Act and investigated.

“During the recording of statement u/s 164 CrPC, the victim girl stated in the court that she and her friend were taken to Rimpu Bagan by the main accused person and one of his friends. They hired one room and sexually assaulted her there multiple times”, the SP said.

Besides, multiple verbal complaints were received by respectable residents of Tura town area that many immoral activities were going on at Rimpu Bagan owned by one Bernard Marak @ Rimpu who is the member of Garo Hills Autonomous District Council (GHADC).

“The police records indicate that Bernard N. Marak @ Rimpu is a known criminal with more than 25 criminal cases registered against him since early 2000s.This person was the self-styled Chairman of the now disbanded militant outfit named A.chik Nationalist Voluntary Council (B) and even after the disbandment of the outfit, he has been indulging in criminal activities like extortion from traders of Tura market, criminal intimidation in case of refusal to pay extortion money, arms smuggling, prostitution, illegal sale of liquor, illegal sale of lottery tickets, teer counters, encroachment on other’s property, illegal collection of money for recommending issue of TNT license etc.”, the police said.

A special operation was launched on July 22 which is still going on. The search operation started around 6 pm and the first phase finished around 5 am on Saturday.

“On arrival at Rimpu Bagan, the search team noticed a three storied building (2 floors in basement and 1floor above ground level) with around 30 small rooms.

“This building was suspected to be the place where the minor girl was sexually assaulted. The team also noticed many young boys and girls openly drinking in the premises, inside the rooms as well as inside the vehicles. Some of them were sitting inside the vehicle without clothes or with very less clothes on the body. Accordingly, the search team detained all these boys and girls numbering around 68 for interrogation. Some managed to run away taking advantage of darkness and by running over crushed liquor bottles. The search team also apprehended the manager, caretaker and other three staff”, police said.

Later, the premise was searched in presence of independent witnesses and 36 vehicles, 47 mobile phones, 168268 ml liquor, huge quantities of contraceptives (condoms) and other incriminating materials were recovered.

“Shockingly, five children (4 boys and one girl) were also found locked inside dingy cabin like unhygienic rooms. All the children were in a state of shock and were unable to speak properly. All these children were handed over to District Child Protection Officer (DCPO) for safe custody and further necessary action as per law”, police said.

19. 1 No. Cross Bow Barnet along with Telescope.

23. 1 No. Register containing records of the visitors.

24. 1 No. Exercise Book containing records of the vehicles of visitors.

25. 1 No. Exercise Book of Mikson Sangma with 7 names written.

Bernard targets Conrad for raid in his farm house

Raid turns political, Bernard says CM after him and family due to fear of losing seat