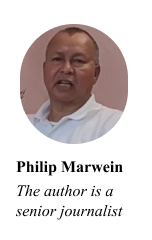 Mushrooms have always been on the delicacy chart and have been used for preparing some of the best dishes in this part of the country. However, it is not easy to get all varieties of mushrooms round the year because these grow on selective semi-dead wood in specific season and are quite expensive.

What makes mushrooms popular worldwide is the health benefits. Mushrooms are high in protein, psyllium and vitamins C, B and D and low in cholesterol and carbohydrates. They help enhance the immune system.

In Meghalaya, especially in the plateaus of Khasi-Jaintia Hills, there are wild mushrooms in early spring (end of February or first part of March), and at times, they continue to grow till May. This species that grows during this season is called Tit Tung. It is delicious when cooked when it is not fully bloomed. It grows only on damp semi-dead wood not exposed to sunlight, like Diengsning or Diengsohot Khasi-Jaintia (wild chestnut wood or commonly called Khasia badam), Dilingim and Diengsoh Khyllam or commonly called non-sal. It also grows on a few non-toxic and damp semi-dead wood. This variety is best eaten fresh when the protein content is maximum. It is also sold dry but the price is higher than the fresh variety.

The price of fresh Tit Tung is between Rs 300-500 per kg but the dry ones are Rs 700-800 depending on availability. In Garo Hills too, there are wild mushrooms of different varieties called Wa’gambal. Mushroom, in general, is called Me’gumu or Me’gume in Garo.

The cultivation of a variety of mushrooms is being encouraged in the state for the past few years. The state Department of Agriculture realised the need to start mushroom cultivation and set up a training centre at the Agricultural Complex in Upper Shillong in 1982 in a humble way. The initiative, over the years, has given a fillip to enhance the income of the cultivators, who are being helped by the horticulture section of the department.

Despite several deficiencies, the training centre continues to work with cultivators to raise good quality mushroom seeds, or spawns, and better the growing process of button and oyster mushrooms, which are of high value for health as well as in terms of economy.

The centre trains growers in how making mushroom houses or sheds, suitable raw materials, preparations before the sowing season, conditioning and sanitising the sheds and raw materials, equipment to be used, and hygienic precautions.

Moreover, the centre continues to encourage and promote cultivation of these two varieties of mushrooms to the trainees from different parts of the state. The button and oyster mushrooms are feasible, suitable, highly beneficial for health and economically profitable for farmers. 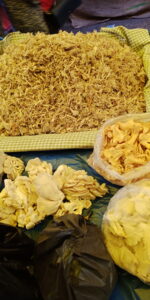 Earlier, we mentioned about Tit Tung. Besides, there are other varieties which are found in the state in different seasons.

In summer, there are wild mushrooms like Tit Dait, which are small in size and grow in gardens and courtyards. There is a larger variety of Tit Dait found in gardens and places where the cattle graze. Tit Dait is delicious even when consumed after boiling. It is traditionally cooked with onion, a pinch of salt, ginger and turmeric.

There is another variety called Tit Kber (termite mushrooms) that grows on termite mounts. Unlike other wild mushrooms, it grows tall. Tit Eit masi, or cow dung mushroom, is also common in this part of the country.

All these varieties are costly and delicacies if we know how to cook. Locally, these are boiled with chopped potatoes, onion, ginger, garlic, a pinch of turmeric powder and salt. A generous splash of green chillies adds to the taste. Of course, it goes without mentioning that while in preparation for cooking basic hygiene has to be strictly observed as these are wildly grown and need to be thoroughly cleansed.

Many villagers died in the past due to careless consumption of unknown wild mushrooms. These varieties of wild mushrooms looked harmless, attractive and highly tempting but they were poisonous in reality.

Though 30 years have passed since the initiation of mushroom cultivation in the state through many trainings imparted to farmers, the scale of widespread mushroom cultivation is not at all satisfactory till date. The reason is that the state government has not accorded top priority to this important activity which will eventually transform the economy of the state through the growth of incomes of cultivators or farmers of Mushrooms. What is urgently required today is to give top priority to the primary sector as a whole and at the same time, to lay more emphasis on the importance of mushroom cultivation by sufficient investment in the much-needed infrastructures required for setting up spawn (seeds) production centres in the state.

There is also a need to set up a Spawns Producing Centre (SPC) in Nongpoh or Umsning for the needs of Ri Bhoi, one in Nongstoin, West Khasi Hills, supplying spawns to South West and East West Khasi Hills. The SPC in Tura (Sangsanggre) needs upgradation and modernisation to supply spawns to South West and West Garo Hills; one SPC in Williamnagar to supply spawns to South, East and North because all these years mushroom growers of these districts depended on Tura (Sangsanggre) or on a private entity, the Mendipathar Multipurpose Co-operative Society, for spawns.

At present, the spawn producing centre in Upper Shillong, which is a part of the Mushroom Cultivation Training Centre, needs urgent overhauling, upgradation and modernisation. The major centre should be fully equipped to meet other multipurpose needs of the Horticulture Department. For this, huge investment is required from the Government, because this centre has played a leading role in the state in imparting awareness, encouragement, motivation and training to farmers in many agricultural activities, including mushroom cultivation and promotion of both button and oyster cultivation in the state.

Since this year, the department is embarking on Mushroom Cultivation Mission, the above requirements are of extreme importance for the department to succeed in the Mission and to witness successes of the mushroom growers.

Now, we cannot ignore or underestimate the efforts put in by the officers and staff of Upper Shillong Mushroom Cultivation Training Centre in the last 30 years and other officers and staff in the districts because their efforts have not gone in vain all these years and yielded results in numerous villages of East Khasi Hills, East and West Jaintia Hills, Ri Bhoi, West-South West-East West Khasi Hills and many pockets of Garo Hills, though in some districts mushroom cultivation started much later in the early 2000. Today, the result of mushroom cultivation is found very encouraging and has spread to several pockets of different districts of the state as can be seen in the following districts.

In East Khasi Hills District, both button and oyster mushrooms are famous. The price of button mushrooms in Shillong market is Rs 400 to Rs 500 while oyster mushrooms cost Rs 300 to Rs 400 depending on the availability. However, the supply is short but the demand is high.

In Jaintia Hills, mushroom cultivation has already begun many years back and has produced results in places like Lakadong, Mustem, Mootyrchiah, Padu and Shangpung.

Now, let us turn to the west of Meghalaya by starting from South Garo Hills. Here the Department of Horticulture is doing a wonderful job in motivating, encouraging, promoting and handholding the farmers in oyster mushroom cultivation because the climatic conditions are suitable for growing this variety. The results are splendid indeed as can be judged from the way the farmers have taken the economic activity seriously.

In East Garo Hills, mushroom cultivation started in 2010 and with the continued efforts of the horticulture officials through awareness programmes and encouragements to farmers, this supplementary economic activity has taken off quite steadily but steadfastly. Today, the number of mushroom cultivators has increased to nearly 150 spread out to about 30 villages in three Community Development Blocks.

According to the DHO of the district, mushroom farmers here are growing oyster variety. In Samanda block, mushroom cultivation is painstakingly encouraged and popularised among the farmers by the horticulture officials under the leadership of the DHO.

The progress in mushroom cultivation in North Garo Hills, West Garo Hills and South West Garo Hills is not known because there is no input from these districts or the headquarters in Shillong.

It is of immense importance that the District Horticulture officers should put in their best efforts and plans in conformity with the mission. They have to take extra care to find out what had happened to the growers already trained in mushroom cultivation, what problems they faced and try to help them to ensure that they take up the activity. This is also to encourage private individuals or farmers to come out of their routine work to take up mushroom cultivation as a supplementary income activity or for personal consumption.