Shillong, Sept 7: Six persons including three women were arrested with 137.78 gram of heroin during raids conducted by the police in parts of the city on Tuesday night.

Police also registered a case in this regard.

According to a statement issued by the SP (City)Vivek Syiem on Wednesday, from their possession 13.54 gms of heroin, 153 vials, 3 mobile phones and a Maruti local taxi was seized. 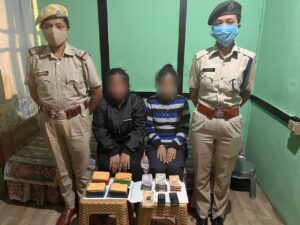 The person who supplied the drugs, Deepika Roy (32) was arrested from Laitumkhrah main road. He led the police to the house of Archana Roy (25) where 57.54 gms of heroin, 1 mobile phone and cash Rs 1,94,975 was recovered and seized, police said.

Following this, the house of Deepika Roy at Nongrimbah, Laitumkhrah was searched and gold ornaments worth 256.36 gms, heroin 66.7gms and cash Rs 19,000 were seized.

BJP will not withdraw from MDA: Sanbor