Shillong, May 13: Heavy rain, flood and landslides on Friday resulted in the death of two persons besides causing injury to four others.

While a minor died and four others were injured when a tree fell on a moving auto-rickshaw in Byrnihat, Ri Bhoi in the morning, a 42-year old man identified as Sidres Kharsahnoh, son of Rosilia Kharsahnoh, died in Jongksha under Mawkynrew Block, East Khasi Hills due to landslide. 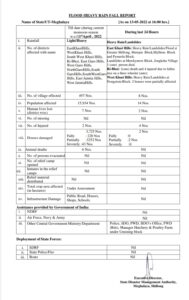 Govt to repair over 1000 dilapidated schools

Work on Shillong-Dawki road to continue