This was announced by UDP president Metbah Lyngdoh on Wednesday.

Addressing media persons, Lyngdoh said that Shira will be the official candidate of the party.
Shira is the sitting GHADC member from Batabari constituency and was the former Rajabala legislator during 2013-2018. He quit the Congress and joined the UDP ahead of the bypoll. Shira was welcomed to the party on Tuesday.
The UDP is hoping to make inroads into Garo Hills.
“In fact  we don’t expect the kind of vote bank that we got in the last election was very encouraging for us that Garo Hills is also one area where we can take part in the coming elections. This is one election that we felt that by getting the right candidate for the right constituency, we will definitely take a call,” he said.
The UDP president said that the party has done proper analysis for the Rajabala constituency. “We felt that our official candidate Ashahel D Shira will definitely win this election. This is the feedback and inputs we got from the ground,” he said. 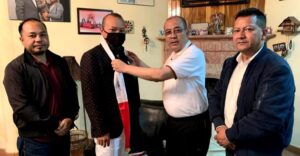 Joint report on West Khasi Hills: 32 villages out of 34 want to be in Meghalaya