Shillong,July 21: The SSA teachers on Thursday night called off the agitation after the state government  assured to release the pending salary for four months and the salary for the fifth month will be released after the Centre releases fund. 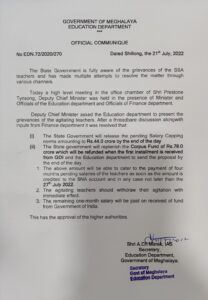 Deputy Chief Minister Prestone Tynsong told reporters that the meeting held with the teachers and officials have decided to release the salary.

As far as the enhancement of salary is concerned, the education commission to be constituted by the government will deal with the matter, Tynsong said. 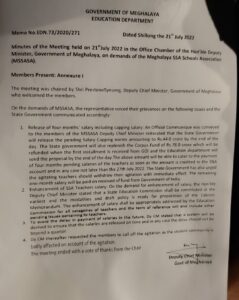 The president of the Meghalaya SSA teachers association, Aristotle Rymbai briefed the matter to the media persons and the teachers gathered at the additional secretariat, parking lot.

Earlier in the day, the teachers met Governor Satya Pal Malik, who wanted the Chief Minister Conrad Sangma to resolve the issue.

Later, the deputy chief minister called the delegation of teachers for talks.

Pressure also mounted on the government from TMC MLA, George Lyngdoh, who petitioned the union education minister to release the central funds.

To a question, the deputy chief minister said it should also be the responsibility of school managing committees to take care of the welfare of the teachers as the schools are private and not run by the government

Angela to contest from South Shillong, Pyrtuh from North