Chaudhary (75kg) crashed out of the Tokyo Olympics after losing to China’s Erbieke Tuoheta in the round of 32 match. 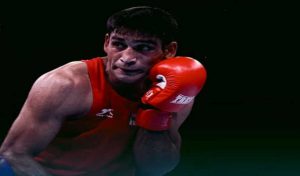 On his maiden Olympic appearance, the Asian Championship silver medallist went down 0-5 in the bout by unanimous verdict at the Ryogoku Kokugikan arena. Chaudhary is the third Indian boxer to bow out of the Tokyo 2020 after Vikas Krishan (69kg) and Manish Kaushik (63kg) also exited with opening-round losses.

Bajwa finished 18th in the qualifiers with a score of 120 and Khan ended at 25th spot with 117 in the men’s skeet event.

Vincent Hancock of the USA won his third Olympic gold with a score of 59 out of 60 in the men’s skeet final, with Denmark’s former world champion Jesper Hansen winning silver and Kuwait’s Abdullah Alrashidi repeating his bronze-winning effort from the previous Rio Games.

India’s Air Pistol and Air Rifle shooters will compete in the mixed team events on Tuesday.

U-25 Men State A Trophy: Jaskirat hits 86 as M’laya put on best performance