Five medals on Monday took India’s medal count at the Tokyo 2020 Paralympics to seven, their best-ever haul at a single Paralympics. India had won four medals at the Rio 2016 Games, their previous best.

In the last competition of the day for India, Antil threw a new world record of 68.55m to clinch the gold medal in the men’s javelin throw (F64) event. During the final, he broke the world record thrice.

The 23-year-old Sumit began with a new world record throw of 66.95m in his first attempt, which eclipsed his own existing record of 62.88m. It comfortably placed him at the top of the pile.

Thereafter, he obliterated it with a throw of 68.08m with his second attempt, making it yet another world record.

After a couple of lean attempts by his own high standards, Sumit’s fifth throw was measured at 68.55m – making it a third new world record in five attempts – and it gave him the gold medal.

Another Indian in the final – Sandeep Choudhary finished in fourth place in the men’s javelin throw F64 category with a best throw of 62.20m.

The world No. 5 shooter had a score of 249.6 in the final – creating a new Paralympics record and also equalling the world record – on her Games debut.

It was India’s first Paralympics medal in shooting and Lekhara is the fourth Indian to win a Paralympic gold after swimmer Murlikant Petkar (1972), javelin thrower Devendra Jhajharia (2004, 2016) and high jumper Mariyappan Thangavelu (2016).

China’s Cuiping Zhang – who shot 248.9 in the final won silver while Iryna Shchetnik of Ukraine took bronze with a score of 227.5.

Meanwhile, Devendra Jhajaria became India’s most decorated Paralympian after he took silver in the men’s javelin throw F46 category at the Tokyo Paralympics.

Jhajaria – a two-time Paralympic champion – had the best throw of 64.35m in the final. It was a new personal best, shattering his own previous world and Paralympic record of 63.97m.

Sri Lanka’s Dinesh Herath won the gold with the best throw of 67.79m, making a new world record in the process.

Another Indian in the competition- Sundar Singh Gurjar won the bronze medal in the men’s F46 javelin throw with a best attempt of 64.01m, which was his best of the season.

It was the first Paralympic medal for Sundar Singh Gurjar, who is a two-time javelin throw world champion. However, the third Indian in the men’s javelin throw F46 category, Ajeet Singh finished eighth with a best throw of 56.15m.

In the men’s discus throw F56 category, Yogesh Kathuniya won silver for India with the best attempt of 44.38m.

Brazil’s Claudiney Batista dos Santos took gold with a Paralympic record of 45.59m and Leonardo Diaz of Cuba won bronze with a best throw of 43.36m. 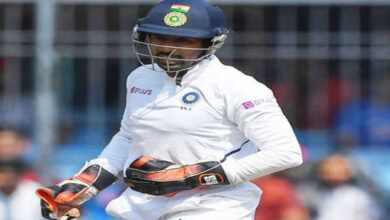