Shillong, Nov 14: As part of Tribal Pride Week (Janajatiya Gaurav Diwas) to be launched on November 15 to recognise the efforts of tribal freedom fighters, a special programme was held at Kongthong known as ‘Song & Whistling Village’ over the weekend to recognise the unique cultural practices of the village.

The programme was anchored by the Department of Arts & Culture in collaboration with Tourism,Sports Departments, National Institute of Fashion Technology (NIFT),CRPF,Martin Luther Christian University (MLCU) and the village authorities who joined hands to commemorate the Janajatiya Gaurav Diwas.

To recognise the unique cultural practice of “Jingrwai Iawbei” or musical name calling of Kongthong village which also earned the village a distinction of being India’s nominee as “Best Tourism Village”to the UNWTO,  various departments and stakeholders are collaborating  by organising several activities at Kongthong village to highlight & recognise its unique cultural practice ,which has earned it several accolades within the state and also at International levels. 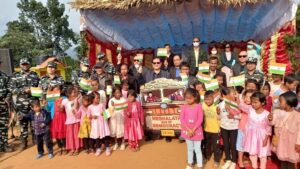 Among the plethora of activities and in recognition of the unique cultural space it occupies, the village was awarded two special artistic plaques awarded by Arts& Culture and Tourism Departments respectively ,which were handed over to the village authorities and to the custodians of Kongthong’s unique cultural practice.

The NIFT prepared 75 flags and distributed them to the performers as part of Azadi Ka Mahotsav, besides 50 flags to the village authorities to mark the state’s golden jubilee. The CRPF also arranged for 75 saplings, which were symbolically planted all over the village as part of India@75. The Martin Luther Christian University(MLCU) anchored a participative workshop on sustainable tourism/sustainable livelihoods & intangible heritage for the village authorities & the village tourism entrepreneurs as part of Village@75. Other key highlights also included ensemble performances & cultural demonstrations of jingrwai Iawbei-musical name calling, personalised song names and tunes by the 75 performers and children of the indigeneous agro tourism cooperative society of Kongthong.

He also informed that as part of the Janajatiya Gaurav Diwas and in active collaboration with the ICCR, the department is at an advanced stage of preparation of a special docuseries –“Revisiting The Warrior Heroes of Meghalaya”,an audio-video docu drama based on the 3 Warrior Heroes of Meghalaya which will revisit the heroic lives and their brave exploits against the colonial powers which will be showcased on social media, audio-video and all platforms with a view to honour, celebrate ,ignite &inspire the present generation about the exploits of the tribal bravehearts, with a view to further celebrate the ensuing Janajatiya Gaurav Diwas.

It was also highlighted that the state level tribal dance, art & craft, costume ,tribal freedom fighters memorial functions& special publications have already been planned and will be organised and rolled out in the week leading to January 21,2022 ,coinciding with the state’s golden jubilee celebration.

A.Das, Director NIFT was also present at the special function.

SPARK on a mission to save childhood

Cong to wait and watch on Mukul's move