Shillong, Oct 6: The East Khasi Hills police on Thursday said the action of using tear gas by the police was only after the protestors violated the prohibitory order.

According to the police, the magistrates and senior police officials tried to convince the agitators not to proceed to the secretariat but did not listen.

‘Tear gas was used as a last resort as the protestors were violent and proceeded to the main secretariat”, SP Sylvester Nongtnger said. 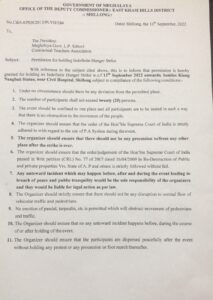 The SP (city), Vivek Syiem who was in the field with the magistrates, said that the teargas use was necessary as the protestors did not pay heed to the plea of the police and the magistrates not to proceed to the secretariat.

According to the police, it was a preventive action so that there is no law and order break-down. 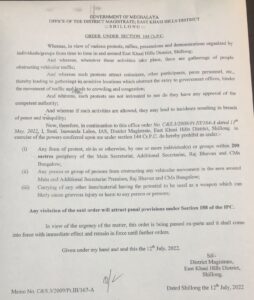 DC had issued dos and don’ts

The office of the East Khasi Hills District Deputy Commissioner had on September 13 written to the president of the contractual teachers’ association not to move out of the Civil Hospital Junction which was the venue of protest.

The letter of the deputy commissioner’s office also said that if there is a breach of peace, this will be the sole responsibility of the organisers and they will be liable for legal action as per law.

Another prohibitory order under section 144 CrPC issued  by the deputy commissioner on July 12 this year is against any protest within 200 meters’ periphery of secretariats, Raj Bhavan and CM’s bungalow.

Hill Festival in November to focus on music, food & environment