Shillong,June 29: The AITC became the target of fake news on Wednesday when its general secretary Abhishek Banerjee visited the state.

The fake post says that the AITC has released its second list of candidates for the 2023 polls and the names are Vicky Dey for South Shillong and Patricia Mukhim for Mawlai.

In response regarding Dey, the AITC said it was a sorry attempt at maligning TMC’s image.

“Vicky Dey is a wanted criminal who the Meghalaya police hasn’t been able to nab. Our leader George B Lyngdoh has also raised the issue of police inaction. We strongly condemn this smear campaign! This petty event will not dissuade us!, the AITC said.

As far as Mukhim is concerned, Meghalaya Editors and Publishers Association (MEPA) said the troll carrying a false press release regarding Mukhim as the candidate of All India Trinamool Congress for the 2023 Assembly elections is sickening and distasteful. “MEPA never expected such a troll with the sole intention of tarnishing the image of a senior journalist,” said a statement issued by MEPA general secretary John W Thabah 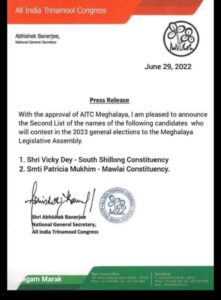