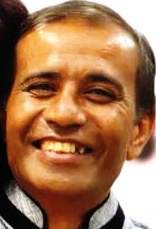 He was 48 and is survived by his wife and two daughters.

His funeral will be held on Sunday.

After completing his master’s degree in history in 1998 from NEHU, Sameer joined All India Radio as a casual reporter. In December 1999, he joined Media Plus news channel as associate editor and later as editor till he joined The Sentinel.

Sameer was a certified defence correspondent.

He was known for asking tough and direct questions and upheld ideals of professional journalism.

Two infants die of Covid after parents take them home