Shillong, April 7: The Meghalaya Public Service Commission ( MPSC) has suspended interviews and recruitments in view of the order of the High Court of Meghalaya on April 5 that the government is not following roster system ( ratio of reservation) while adhering to state reservation policy.

The chairman of MPSC issued a notice on Thursday stating that all interviews and recruitments stand cancelled with immediate effect. 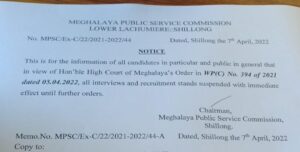 “It is alarming that despite 50 years of the formation of the state and 50 years of reservation in state government jobs, there is no roster system yet. Indeed, this Bench was constrained to raise a question in course of a recent matter as to how the reservation policy could be implemented without a roster. It is surprising that there are bureaucrats in place and there have been bureaucrats for the last 50 years and it did not dawn on any one of them to ensure that the roster system was put in place before the reservation policy could be appropriately implemented, the division bench comprising Chief Justice Sanjib Banerjee and justice W Diengdoh had said in its order.

The court said n view of such deplorable state of affairs, where the absence of any roster system leaves open possibilities of nepotism and arbitrariness and worse forms of subversion, the further recruitment processes for all posts in the state will remain stayed in the sense that no further appointments will be made until the roster system is put in place and the rosters are prepared in respect of all posts whereupon, after applying the reservation policy, future recruitment can be conducted by adhering to the ratio of reservation.

“This will apply across state government agencies and instrumentalities in the state wherever the reservation policy is in vogue. Let this matter appear a fortnight hence. A copy of this order must be reached to the Chief Secretary in course of the day for the Chief Secretary to indicate what steps have been taken when this matter appears next. This aspect of the matter will be considered as a suo motu public interest litigation”, the court said.

Though it is the state’s case that the prevailing reservation policy applied to the recruitment process pertaining to the present matter that was initiated in 2006 and completed in 2009, even the advertisement did not indicate how many posts were for reserved candidates and how many for others. There does not appear to be any list of employees in each post relevant for the purpose of reservation, the court observed.

“Upon inquiry, it is discovered that it is the same distressing feature in the matter of recruitments in this High Court over the last decade of its existence. Learned Advocate for the State admits that there are no lists pertaining to posts for any assessment of what category of candidates ought to be next recruited.  Learned Advocate-General, who is present in Court, acknowledges that reservation cannot be implemented without a roster and also refers to the relevant Constitution Bench judgment reported at (1995) 2 SCC 745 (R.K. Sabharwal v. State of Punjab)”, the bench said.

The court alao said it is also noticed that several of the notifications and official memoranda that have been relied upon by the parties in the present matter are littered with mistakes; mistakes that should not have happened if proper mind was applied to the matters in issue. These documents have also been disclosed by the parties mindlessly without indicating the mistakes in the documents.

“It will be open to the state to use a supplementary affidavit to justify the appointment of 12 candidates in tranches and why someone was appointed ahead of the others on account of the reservation policy or otherwise. Such supplementary affidavit be filed within a week from date and a rejoinder thereto may be filed before the matter is taken up a fortnight hence”, the court said.

The matter will come up for hearing on April 20.