Shillong, June 1: The Thma U Rangli Juki (TUR) has busted the state government’s claims about the pandemic dole given last year.

As per the reply to TUR’s RTI query, many phone numbers of beneficiaries listed under the Meghalaya Building and Other Construction Workers Welfare Board are “duplicate numbers”.

In a random survey carried out by TUR, it was found that “only 30% of the numbers worked”. 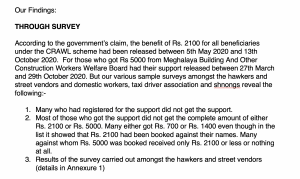 “Out of those who we managed to talk to, only 20% got Rs 5,000, 80% not only did not receive the money but also did not know that their names appeared on the list,” TUR said.

According to TUR’s sample survey among hawkers, street vendors, domestic helps, taxi drivers and shnongs, “Many who had registered for the support did not get the support. Most of those who got the support did not get the complete amount of either Rs 2,100 or Rs 5,000. Many either got Rs 700 or Rs 1,400 even though in the list it showed that Rs 2,100 had been booked against their names. Many against whom Rs 5,000 was booked received only Rs 2,100 or less or nothing at all.”

In a letter to Chief Minister Conrad Sangma on Tuesday, TUR pointed out the blatant lies of the government.

“On 28th March 2020, the Labour Department, Government of Meghalaya published the notification regarding financial assistance to marginal sections of the society who were deprived of their daily wages during the lockdown period. Chief Ministers Relief Against Wage Loss (CRAWL) was meant to assist citizens who had lost their livelihood by transferring Rs 700 per week to their bank accounts. Those citizens who were registered with BOCW and MGNREGA were not entitled for CRAWL support as they were to receive support from these entitlements. Muster Roll or Casual workers in Govt. depts. were also not entitled. As an organisation of working class people, who had submitted a memorandum to the government making suggestions about income support at the start of the pandemic in 2020, we welcomed this decision of the government and worked at publicising this call so that all deserving beneficiaries could register for this programme.

“In the absence of any social audit as mandated by the governments own Social Audit law, where the government should have suo motu released the names of beneficiaries so that the citizens could have audited the implementation of the scheme, we accessed the information through the Right To Information Act 2005.”

The NGO provided the details of their surveys in the letter and asked the government to act. “If no action is taken within a week of receipt of this letter (via email), we would be forced to resort to other means because there is a crisis of hunger and desperation amongst the working classes of Meghalaya because of the loss of livelihood, exacerbated by the Govts. wilful mismanagement,” TUR said in its letter.